Home ☢ Movies ☢ 6 possible solutions to the #OscarsSoWhite and #OscarsSoMale controversies 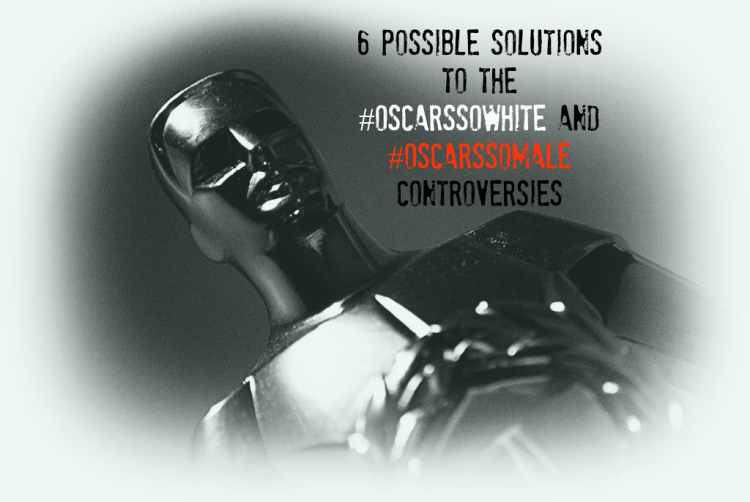 It’s no secret that Hollywood is a white boys’ network. This has been an almost immutable fact for decades…until now. Suddenly, the cries for change are so loud that Hollywood is finally sitting up and taking notice. For the first time, the players seem on the verge of actually doing something about it.

It’s all thanks to a social media firestorm. Twitter has been abuzz with the hashtag #OscarsSoWhite this and last year, because all 20 Academy Award acting nominees in 2015 and 2016 were Caucasian. Yet the “diversity problem” isn’t exclusive to an awards show happening once a year; it’s something that extends from the bottom of the film industry to the very top.

According to USC professor Dr. Stacy L. Smith, “[Hollywood doesn’t] have a diversity problem. We have an inclusion crisis.”

Dr. Smith is one of the authors of a sweeping study from the Media, Diversity and Social Change Initiative at the University of Southern California’s Annenberg School for Communication and Journalism. The just-released study threw a shaming spotlight on the stunning lack of diversity in Hollywood, and it put forth a mandate that it needs to change if it’s going to remain relevant and reflect the true diversity of American society. The problem also includes the drastic underrepresention of women in major fields: women only directed 3.4% of the films analyzed for the study.

But how can change be implemented? The solutions must be broad and address the lack of diversity at many different stages and places. Here are just six ways that Hollywood can go about addressing this lack of diversity in an effective and meaningful way.

Film schools must recruit and support more women and people of color.

Attending film school is a monumental undertaking, both financially and academically. It’s a place where students can learn all the skills they need to achieve storytelling excellence, but it can be a harsh and discouraging environment. Some programs are even designed to weed out students. Yet film schools can’t afford to take a hands-off approach towards women and minority students anymore if they want to remain relevant and be a part of the solution for the industry’s lack of diversity.

Film schools need to recruit and support a more diverse student body. They must offer more financial aid and scholarships so that students of diverse backgrounds can better afford to attend. African-American director Ava DuVernay has been quoted as saying, “Film school was a privilege I could not afford.” Perhaps her directing career, which includes the film Selma, would have been jumpstarted sooner had she been able to.

Offices of diversity outreach should be created or augmented to make sure that the needs of female students and those of color are being met. Professors need to make sure that students’ minority- and female-driven stories are critiqued but also validated in class. More grants should be available so that these same students can then make their films.

Film school students are college grads, but they are young, vulnerable and in need of guidance, and encouragement. Professors need to go out of their way to educate and support women and minorities, to help arm them with the fearlessness it’s going to take to forge a career. While they are at it, film schools need to hire and give tenure to more women professors and people of color to create role models. Sadly, four of the six women in my film school class did not complete the program — two of them were of color. Whether they couldn’t afford to continue, or they didn’t feel welcomed and supported, it’s a loss for the film industry as a whole.

The Academy needs to increase the diversity of its ranks.

It’s no secret that the Academy is slow to change. In the past 10 years, it’s been beleaguered with falling TV ratings due to its being out of sync with the movie going public. Now they are scrambling to get in sync, but it’s going to be very challenging. Academy President Cheryl Boone Isaacs says, “The Academy is going to lead and not wait for the industry to catch up.” The Academy plans to double its ranks of women and minorities in the next four years. If Isaac’s mandate is true, that will mean the Academy will be 50% female in just four years (It’s now just over 25% female). That would indeed be a radical and exciting change.

However, the goal to increase the membership of people of color is more modest. African-Americans comprise just 3% of the Academy now, so that number being bumped up to 6% in four years is an extremely modest goal. Asians and Latinos would go from 2% to 4% respectively. If we employ these statistics, the Academy have 14% minority voters in four years. This low percentage in unlikely to bring about broader diversity among the ranks of nominees for which many are hoping.

Membership is by invitation only, and there is a prestige factor. Artists and filmmakers need to achieve a degree of prominence before they can score an invitation. According to the bylaws, actors need three film credits, and filmmakers need two. So part of Oscar’s mandate must be to help talented women and people of color arrive at that place of prominence, where their work is receiving recognition. That means that their movies have not only to get made but seen. And this brings us to the root of the problem. “The prequel to ‘OscarsSoWhite’ is ‘HollywoodSoWhite,’” explains Dr. Smith.

Chris Rock was only joking when he introduced Stacey Dash as the “director of minority outreach,” but creating such a position at the Academy could significantly begin to address the shortfall of stories by women and minorities.

The Academy also has to proceed with caution in changing its membership rules. One of the proposed new rules is imposing 10-year membership terms, and that Academy members must have a film credit within that 10-year period to maintain membership for another 10 years. This could create a different sort of problem in the form of ageism, as many retired members of the Academy would lose their membership almost immediately.

Also, given how difficult it is for women and minorities to get their films made and find work, the 10-year limitations could wind up excluding the very members the Academy is hoping to bring in to the organization. For instance, if they transition from working in film to TV, which is a more welcoming medium, would women and minorities suddenly find themselves ineligible to vote years down the line? Members will now need three consecutive ten-year terms to achieve permanent voting status. What would happen to a groundbreaking pioneer like African-American filmmaker Julie Dash, who prior to a new documentary entering production this year, did not have a film credit to her name in 12 years, according to IMDB? The Academy could find itself back at square one.

There is strength in numbers. It used to be that studios produced dozens of films of varying budgets. Many of these were romantic comedies and dramas with a strong appeal to women and minority audiences.

Now studios are hardly producing any films with mid-sized budgets, instead focusing on the big blockbusters, particularly action movies or children’s films. They have specialty divisions that handle distribution for a few independent films or the rare small movie produced in-house. Overall, smaller films aren’t getting made any more by studios (most are financed independently with studios brought in later), but many of these could be the type of quality films that could be marketed to a diverse audience while at the same time appealing to the voting Academy.

It’s been proven that a small investment can yield huge returns with the right project. As an example, 12 Years A Slave cost $22 million to make, and it grossed $187 million in worldwide box office returns (there is a market for these stories!). Woman in Gold starring Helen Mirren, age 71, was the most successful independent film last year. The movie with a strong appeal to an older female audience was made for approximately $11 million, and returned over $61 million in box office. That’s a nice profit margin. Clearly movies like this are winning, so why aren’t more of them being made?

Hollywood studios needs to diversify its hiring among its staff positions.

The USC Annenberg School study demonstrated a lack of diversity not only in cast and crew for projects, but in studio executive and board positions as well, where it found that “women represent about 20 percent of corporate boards, chief executives and executive management teams.” (Data for minority representation in studio executive positions wasn’t available). Hollywood executives are the ones who hold the power. They are the ones who find and develop projects, and greenlight them for production and distribution. The film industry “still functions as a straight, white, boy’s club,” the study concludes.

As long as studio executive positions are 80% white male, and they just keep on hiring their buddies, we are going to continue to see this troubling lack of diversity in projects being made and produced.

TV networks have hosted diversity showcases, and this is great, but there is so much more that can be done. For instance, I’d love to see wealthy studio moguls give back by starting outreach programs for youths of disadvantaged backgrounds. They could start right in their own backyards in neighborhoods like Watts and Compton, where the next Spike Lee, Ava DuVernay, or John Singleton is waiting to be discovered.

Or how about kicking in major bucks for an organization like Inner City Filmakers, which is already nurturing diverse young filmmakers and assisting them on their journey to college? Finance more spots for the Sundance Diverse Storytellers writers’ and directors’ labs or the IFC’s Project Involve, so that more young filmmakers of diverse backgrounds have the opportunity to be mentored and given a platform for their talent.

Fund more film school scholarships so that youth of disadvantaged backgrounds can afford to attend and get the invaluable training. Offer grant money to these same youth so that they can make short films as calling cards exhibiting their talent. This investment will pay off by providing the studios with a pipeline of fresh and current stories from new talent that can be developed, and for which that same new talent should be generously compensated.

Women and minorities need to start their own film companies

If you want something done, do it yourself. Hollywood needs more production and distribution companies founded and run by women and people of color that focus on diverse content. Established industry professionals and angel investors with deep pockets need to put their dollars behind these companies to bring about change. A case in point is Ava DuVernay, who helped create Affrm, the African-American Film Festival Releasing Movement, a distribution organization that, according to the New York Times, brings “select black-themed art films —- like ‘I Will Follow’ and Andrew Dosunmu’s ‘Restless City’ — to multiplexes in major cities.” These are exactly the kind of niche, prestige films that can make Oscar sit up and take notice.

Hollywood’s road to diversity is slow in coming. It’s sad that the entertainment industry has to be shamed into taking action, but in the long run, the stories chosen to be made for the big screen will better reflect the identities of the movie-going public, without sacrificing the ever-important bottom line.