Everyone knows that movie making is a business. Many films are produced just to turn a profit. But there is also a special breed of movies that were made for reasons other than economic ones. These are the passion projects, the ones produced against all odds that fight their way from obscurity to find an audience, people to connect with them. So many of these deserving films never do get released, but one of the lucky ones, and one of the strongest passion projects to emerge out of 2012, is “Beasts of the Southern Wild.”

Passion projects are movies that elevate the soul. “Beasts of the Southern Wild” does this and much more. There is poetry in the story of Hushpuppy (Quvenzhané Wallis, now the youngest Best Actress nominee ever) and her journey. She, along with her father and a few family friends, struggle to keep their community intact in the wake of Hurricane Katrina (never mentioned by name).

It’s hard not to flinch when witnessing the abject poverty-ridden existence of the residents of Bathtub, a tiny ramshackle Louisiana bayou community.

It’s almost impossible to believe this is America. This “Southern Wild” is a third world country. There is no formal education for the children here, and the people live off the land, hand-to-mouth, uncivilized. They are the Beasts of the Southern Wild. To forget, they drink (yes, even Hushpuppy is offered booze at one point).

Yet in this unforgiving landscape there is a kind of poetry, and there is love. It would be easy to say that the American Dream has abandoned its residents, but some of the residents don’t seem to want it. They want to be left alone, to live as they have for generations, and when the “American dream” comes knocking in the form of evacuation after Katrina, the residents of Bathtub rebel. They’d rather die than leave Bathtub.

Renegade spirits in the untamed wilderness 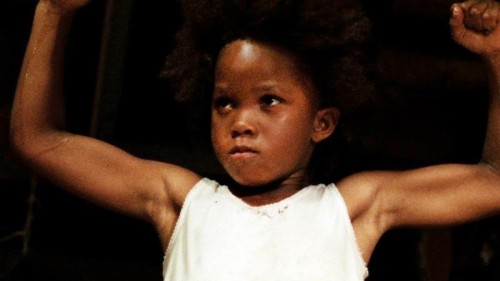 Hushpuppy’s father Wink (Dwight Henry, himself with no previous acting experience) tests her strength at every turn, challenging her more like a father would a son than his six-year-old daughter: grabbing cat fish out of the water with their bare hands, challenging her to arm wrestling, never allowing her to cry. He even asks her, “Who’s the man?” The answer: she is. It’s incredibly refreshing to see him encouraging her realization that she can do anything she puts her mind to. There is remarkable tenderness in their relationship. For all his faults Wink loves Hushpuppy unconditionally.

Beasts of the Southern Wild Quvenzhané Wallis as Hushpuppy 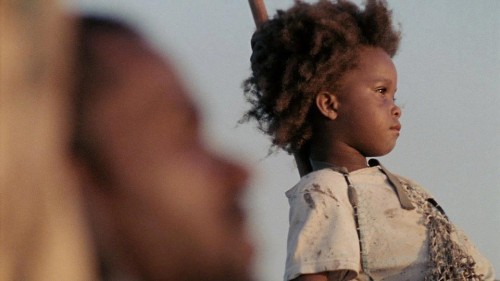 For all her renegade spirit and toughness uncharacteristic in one so young, Hushpuppy longs for her mother who abandoned them long before. She retreats to the world of her imagination, and seeks solace in that untamed wilderness surrounding her. Time and again she feels she needs to prove her strength, perhaps that she is deserving of a mother. That she is a survivor. Yet with every show of strength, there is also the reality that she is a vulnerable little girl, and these two things are in constant conflict in Hushpuppy. But every time the survivor overcomes.

“Beasts of the Southern Wild” is a post-Katrina allegory crafted with artistry by director Benh Zeitlin. He dared to dream, took an incredible risk with a concept with no commercial or marketable qualities, and helped audiences understand and admire his vision.

Here’s to many more passion projects.

Please check out my related post about the oldest and youngest Best Actress ever nominees sharing a spotlight in 2013, and what their performances have in common.