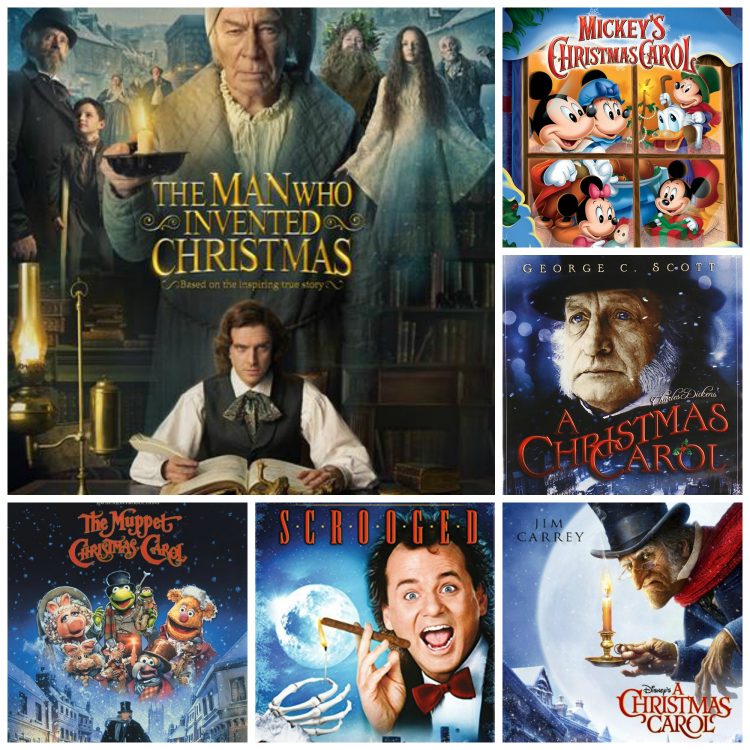 Every few years, a new version of A Christmas Carol hits screens large or small. This Thanksgiving, The Man Who Invented Christmas comes to the big screen, with the story brought to life again, this time through the eyes of its author, Charles Dickens.

Over the years, giants of the cinema like George C. Scott have portrayed Ebenezer Scrooge. The story has proven adaptable to all kinds of interpretations. Even the Muppets have given it a whirl with Michael Caine as Scrooge, and Bill Murray was Frank Cross as a “modern day” (1980s) corporate CEO in Scrooged.

Without further ado, here is a list of A Christmas Carol movies to enjoy with your family this holiday season.

The Man Who Invented Christmas (2017)

Looking for a family-friendly and thoughtful holiday movie playing in cinemas that isn’t animation? My eight-year-old daughter and I loved this movie hitting theaters for Thanksgiving. Fans of Downton Abbey and the recent live-action Beauty and the Beast will be delighted to see Dan Stevens as Charles Dickens as he struggles to conceive and publish A Christmas Carol in a matter of weeks. Ebenezer Scrooge, and eventually the entire cast of characters, spring to life in his mind, and then haunt him as he confronts writer’s block, family conflicts, and disturbing memories of his own time as a boy in one of the infamous London workhouses. His personal story mirrors that of Scrooge’s in a touching way, with the legendary Christopher Plummer portraying Scrooge.

It’s A Christmas Carol for the preschool set! Three ghosts visit Donald Duck’s Scrooge (perfect casting!), helping him learn generosity and the true spirit of Christmas. Mickey Mouse is the earnest Bob Cratchit. While the three ghosts who visit Scrooge are a little on the scary side, overall this is a terrific Christmas movie to enjoy with young children.

A Christmas Carol was screaming for a Muppet adaptation, and luckily the Henson family took it on. Put your skepticism aside and prepare to let your heart be warmed by a production that really does manage to capture the beautiful message of Dickens’ original story. Yes, Gonzo is Charles Dickens and Fozzie is Fozziewig. In a hilarious turn of events, Miss Piggy as Mrs. Cratchit is married to Kermit’s Bob Cratchit. Their kids are two Miss Piggy clones, while the rest, including Tiny Tim’s Robin, are frogs. Scrooge is Michael Caine in one of the best performances of his career (I’m not kidding). It’s a feel-good musical and a great way to introduce kids to this classic story.

Alastair Sim brings Scrooge to life in this version that portrays the source of his heartbreak and cruelty. What makes Scrooge who he is — a cruel, lonely miser? The movie shows us heart-wrenching scenes that help explain it. Adapted by Noel Langley of Wizard of Oz fame, this version is the favorite for cinema buffs.

This adaptation of the Dickens classic stars George C. Scott (my favorite actor) in a tour de force performance as Scrooge. The movie, originally made for TV, portrays the bitter realities of the time for the working poor and helps us understand why Dickens advocated so passionately for change. You’ll be moved by Scott’s sometimes gut-wrenching portrayal of a man whose heart is genuinely changed. This version will spark thoughtful conversations with older children.

If you are looking forward to a classic Christmas movie night, why not make it a double feature with It’s a Wonderful Life and this version of a Christmas Carol with Reginald Owen as Ebenezer Scrooge? Less intense than later screen adaptations, this version is a gentler way to introduce children to the story while introducing a greater focus on Scrooge’s clerk Bob Cratchit and his family, especially Tiny Tim. Don’t be surprised to see Tiny Tim looking unrealistically healthy and cherubic, as is humorously pointed out by my friends at Common Sense Media.

There’s something so 1980s about making over A Christmas Carol with a Ghostbusters twist. Bill Murray plays a network executive who produces a violent live-action version of A Christmas Carol for ratings, and in the process has a change of heart and learns about kindness to others. With a PG-13 rating this one is best left for teens, who may not be interested because it really is dated. However, Scrooged is a cult favorite, and parents will appreciate the nostalgia and funny if over-the-top performance from Billy Murray in his prime. Watch this one after the kids are in bed with a good glass of eggnog.