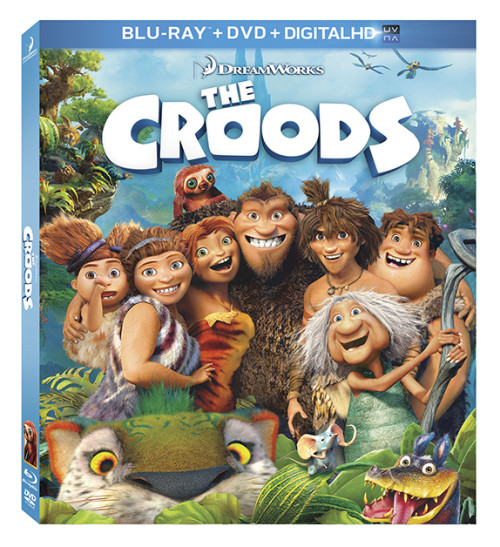 There was a lot I loved about the movie The Croods, releasing on Blu Ray and DVD on October 1, 2013.  One of the main things was the theme about the importance of getting outside of your comfort zone. In The Croods, natural forces beyond their control destroy a prehistoric family’s cave. It had been the place where they had always felt safe from predators, the place where protective father Grug (the voice of Nicolas Cage) could keep a watchful eye over his children, including his gigantic and lovable nine-year-old son Thunk, the voice of Clark Duke.

Clark has starred in such TV hits as The Office and in the movies Hot Tub Time Machine and Kick-Ass. I recently had the opportunity to speak with Clark about his role as Thunk and his amazing career. One of the things I admire most about him is his ability to get outside of his own comfort zone in terms of the roles he takes on. As a comedy actor, he’s certainly not afraid to try some pretty brave things to get a laugh. For instance, Clark had never done animation prior to The Croods, and with a lesser talent, the character could have been forgettable or fallen flat. Thunk is not too bright, but Clark gives him heart and a sweetness that makes him memorable, rounding out a wonderful ensemble cast performance. 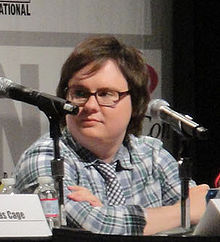 Clark Duke, star of The Croods and Kick-Ass 2. Photo: Wikipedia

Clark’s career is blossoming because he is fearless, and the roles he takes on, as well as his acting choices, are very fun and interesting to watch. Here Clark shares some exclusive insights into his career with Reel Mama readers.

Reel Mama: What is The Croods about?

Clark: The Croods is about a family growing apart. The kids, the daughter, Emma Stone’s character, becomes a teenager, [and it’s about the family] just having to learn to adapt to their world changing around them.

Reel Mama: I really enjoyed the animation in this movie—it was really a cute film.

Reel Mama: I agree! It’s beautifully done. I was lucky to get to see it on the big screen with my daughter, and she really loved it too. I wondered if you could tell me about your character Thunk in The Croods? 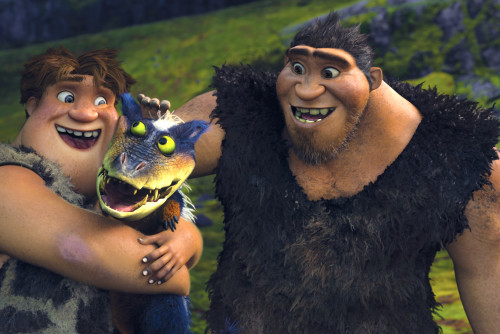 Thunk, voiced by Clark Duke, and Grug, voiced by Nicolas Cage, from The Croods

Clark: Thunk is eight or nine years old, but he’s enormous. He’s like, 300 pounds, 6’5”, so he’s not totally in control over or comfortable with his own body, but he’s incredibly sincere and genuine, and kind of naïve at all times. There’s just a real sweetness to him.

Reel Mama: I really love that character. You have a lot of “smart aleck” kids portrayed both in animation and on sitcoms, and it was really refreshing to see such a sweet and loveable kid.

Clark: Totally! I thought so too. Like I said, I was just trying to make him very genuine.

Reel Mama: On that note, what really attracts you to a role?  What has to strike you about a role for you to be interested in taking it on?

Clark: It’s definitely on a case by case basis, but for this it was just exciting to do something I’d never done before: animation. Plus the cast was so amazing, the directors Chris Sanders and Kirk De Micco, were so great. It was just an exciting one to do. The main thing is trying something new.

Reel Mama: What were the joys and challenges of taking on an animation project, with your having to create a performance only with your voice? Were there any challenges that you found with that, or was it all fun for you?

Clark: Not challenges so much as just figuring out what the process is. I really enjoyed it. I would probably do it again. I found the character over the course of the couple of years we recorded. The character just kind of developed, but it was a fun process.

Reel Mama: How long was the development process on this, and how long were you recording the voice as the character evolved?

Clark: I think the directors worked on the movie almost ten years, or something crazy like that. These animated movies take years and years to make. I was involved for probably a couple of years.

Reel Mama: Do you think you’ll be reprising the role of Thunk any time soon?

Clark: I hope so. I know they said they wanted to do a sequel, after the first one did so well. We’ll see. I’m definitely open to it.

Reel Mama: You mentioned Chris Sanders and Kirk De Micco, the The Croods’ directors. What were the highlights for you of working with them as directors? Did they have a unique approach that differed from directors you’ve worked with in TV and movies?

Clark: They were great. I don’t have a lot of other animation directors to compare them to, but they were super fun and helpful. They were the ones I read all the lines with when we recorded. They were fantastic, and the way that they juggle so many elements at the same time is kind of mind blowing, because they are thinking about everything visually too, and how the sequences come together. I personally probably don’t have the patience to direct an animated movie, like those guys have.

Reel Mama: Did you have a chance to interact with any of the other cast members, or were you exclusively working with Chris and Kirk in terms of your performance?

Clark: Just with Chris and Kirk. It’s the nature of animation.

Clark: Yeah, it’s kind of amazing. It seems like everybody’s together, when you watch it. You would never think that everybody recorded their lines separately.

Reel Mama: Just thinking about my experience watching the movie, it’s hard to imagine you weren’t all in the same room together. It really speaks to the gift of the directors and the actors to pull it off. And speaking of directing, I know you have directed some things, and I’d love to ask you about your web series, Clark and Michael. I wondered if you could tell me about it. Are you and Michael Cera playing yourselves in the series?

Clark: I’m playing an extreme version of myself. The least likeable version of myself. I was a film production major, and the pilot was my thesis film in college. CBS bought it, and we made ten of them.  It’s funny the life that something has online. People are still discovering it all these years later. It came out in 2008. I feel really proud of it. Mike and I sat down last year and watched a bunch of them, and they were still making me laugh.

Reel Mama: They’ve taken on a life of their own on the Internet, wouldn’t you say?

Clark: It’s crazy that people are just now discovering it. I feel like at the time it was so early on, before Hulu. I think Youtube was around, but it wasn’t what it is now. The show was on CBS.com, and it was during the real infancy of web shows. I feel like the viewing habits [of audiences] have just caught up for a show like that to work.

Reel Mama: There’s a lot more demand for mobile content in general, and that’s why a lot of people are just discovering your series now. Are there going to be any more of the Clark and Michael series, or anything else that you are going to be directing?

Reel Mama: Would it be fair to say that you guys are working on a project that’s in that vein, or would you like to share any other details, or is it top secret for now?

Reel Mama: I will be looking forward to your future collaborations with Michael as well! Could you talk about your role as Marty in Kick-Ass 2?

Clark: I got to play a superhero, which is a childhood dream of mine, definitely a bucket list thing. In Kickass 2 we form a team, kind of a justice league of heroes, and Kick-Ass and I get to be on the team together, along with Jim Carrey’s character. It was pretty amazing.

Reel Mama: In terms of the Blu-Ray release of The Croods, how do kids react to the movie?

Clark: They seem to love it. I know Rob Corddry’s kids really liked it. I don’t know if they put it together that it was me [playing Thunk], but all the people I know with kids said they loved it.

Reel Mama: Do you think you’ll do any other animated movies in the future?

Clark: Maybe. I enjoyed it a lot. They’ve talked about doing a sequel to The Croods, so we’ll see.

Many thanks to Clark Duke for taking time out of his exciting projects to talk with me! You can check out my review of The Croods here.