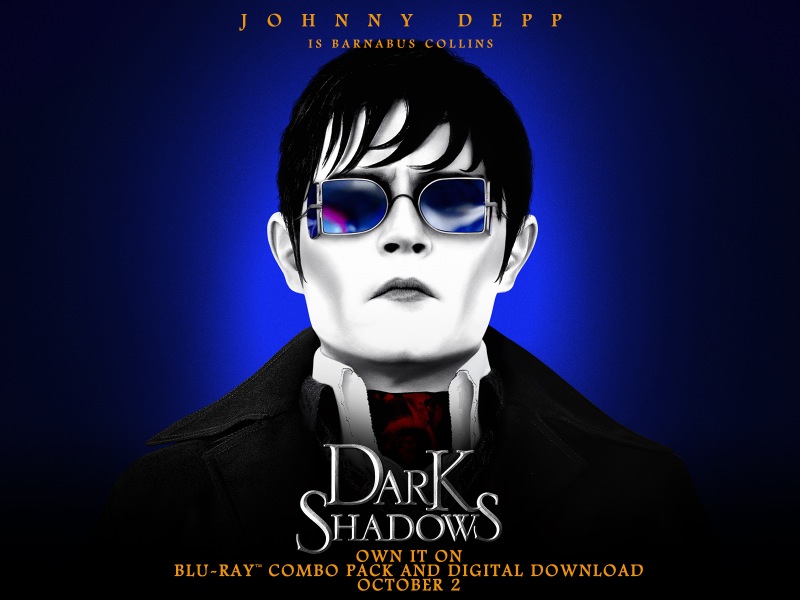 Film director Tim Burton is one of the only true Hollywood auteurs with filmmaking that is instantly recognizable, entertaining, and inimitable.  Burton is at his best with his trademark popcorn Gothic: movies that are dark and creepy in tone and production design, yet relentlessly fun and memorable.  “Edward Scissorhands,” “Sleepy Hollow,” “Corpse Bride,” and “Sweeney Todd” are all unmistakably Burton, and so is his latest film “Dark Shadows.”

Burton couldn’t resist the current vampire craze, which is right up his twisted alley.  In the film the vampire Barnabas Collins (Johnny Depp), chained in a coffin for 200 years, breaks free only to find the world drastically transformed.  The year is 1972, and he finds his senses bombarded with the likes of pothead hippies, Wheaties for breakfast, and such “sorcery” as perky Karen Carpenter crooning on the TV console.

His backstory is a sad one.  In 1772 Barnabas was the son of a wealthy New England couple who had emigrated to America from England and made a fortune in the fishing trade.  As a young man Barnabas rejected the advances of the family maid Angelique (Eva Green).  Little did Barnabas know Angelique’s secret identity as a powerful immortal witch.  She exacted revenge by killing his parents and fiancée and turning him into a vampire, a cursed existence that is nothing short of a living hell for him, then chaining him in the coffin and burying him alive. 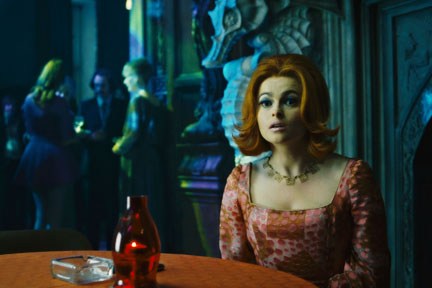 Barnabas returns to the Collins’ family estate to find it a shambles — both the mansion and the family itself.  The mansion is the perfect cobweb-filled backdrop lifted right out of the B-grade macabre classics Burton adores.  The odd assortment that barely passes for a family living there takes dysfunction to new lows.  The family matriarch is Elizabeth (Michelle Pfeiffer), who seems resigned to the fact that the family has fizzled and is in survival mode.  Her daughter is fifteen-year-old Caroline (Chloe Grace Moretz), whose drug-induced haze is alarmingly funny.  Elizabeth’s brother Roger (Jonny Lee Miller) is a self-centered prick, and his son David (Gulliver McGrath) is a precocious eight-year-old who communicates with his dead mother.  Dr. Julia Hoffman (Helen Bonham Carter) is the unhinged family psychiatrist/psychopath in residence.

Barnabas’ task is to restore his family, a dark shadow of its former self, to glory. 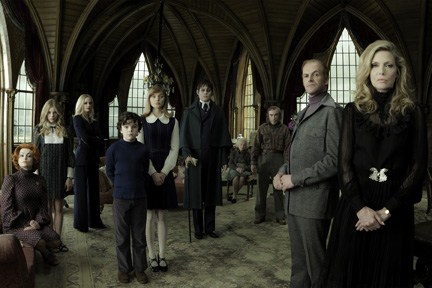 A picture of family dysfunction: the cast of “Dark Shadows.” Photo: Warner Bros.

“Dark Shadows” is a dark comedy that revels in camp.  Classic moment: Barnabas’ look of shock when putting his finger in an Operation game and triggering the buzzer.  Like Austin Powers before him, Barnabas is transported from the past and must come to grips with new-fangled modernity.  But unlike the 1990s update of “The Brady Bunch,” the joke’s not on him.  Barnabas ends up making himself quite at home in his post-“shag-adelic” new reality, to the point where he invites shock rocker Alice Cooper to perform at the ball he organizes.  Unfortunately, Alice Cooper wasn’t able to transport himself back in time, and thus his fossil rocker appearance is oddly out of place for a film taking place in the early 1970s.

You might expect to find Elvira Mistress of the Dark dropping in for a snide comment or two, but instead we have the vamp in the form of Angelique, now calling herself Angie, returning to find and destroy Barnabas.  Hell hath no fury like a woman scorned, and for Angie revenge is not a dish best served cold, but one that requires heat of a sexual and violent nature.  She seeks vengeance until she cracks, quite literally, an effect that is the coolest in the film.

The plot of “Dark Shadows” is like your mother’s macramé plant hanger: knotty with twists in the wrong places, and with a few too many holes.  A few plot developments are trippy and yet strangely seem to belong in this campy crazy quilt. 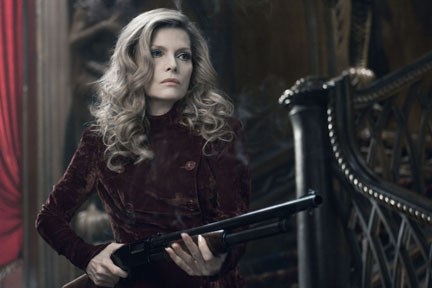 Johnny Depp is hilarious in his unflinching portrayal of the walking dead anachronism.  The effects of ghosts and the house coming alive are remarkable, but even more remarkable is Burton’s perfect recreation of the early 1970s, from the hairdos to the lava lamp.  It’s a bizarre black comedy, true to its B-grade roots, with some hilarious moments.  This movie is weird, and not Burton’s best, but it’s fun if you’re looking for an excuse to eat popcorn, and you have a slightly warped sense of humor.

It should be noted that “Dark Shadows” is based on the successful gothic late 1960s, early 1970s soap opera of the same title.  The original black and white series is quite addictive, and can be enjoyed on Netflix.  Jonathan Frid, who performed the role of Barnabas in the original series, unfortunately passed away last month.  His cameo role in the Burton film was his last appearance on camera.

Reel Mama’s rating for Dark Shadows: Appropriate for ages 15 and up.  “Dark Shadows” isn’t a family film, but it doesn’t merit an “R” rating either.  There are pill-popping, pot smoking, sex acts implied and represented, innuendo, profanity (no f-bombs or mother of all f-bombs, but you’ll find the milder ones present), and mass murder in the form of Barnabas killing for blood.  Nevertheless, nothing is represented in graphic detail.  There is no gore or nudity.  The movie is dark but the tone is just light enough, and the eyebrow-raising moments cut at just the right moments, so that to be accurate the movie comes close to meriting the PG-13 rating it received.