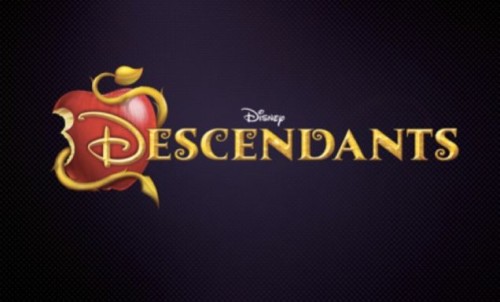 The Descendants features offspring of Disney villains attending high school in the spirit of High School Musical. Can you find Mickey Mouse in the apple? (Photo: D23)

Yes, this is really a thing. Descendants is going to be a Disney Channel original movie directed by the same guy who did High School Musical, Kenny Ortega, but this time the kids attending high school are the descendants of Disney villains.

Here is the premise of the movie, courtesy of D23:

In a present day idyllic kingdom, the benevolent teenaged son of the King and Queen (Beast and Belle from Disney’s iconic Beauty and the Beast) is poised to take the throne. His first proclamation: offer a chance at redemption to the trouble-making offspring of Cruella De Vil, Maleficent, the Evil Queen and Jafar who have been imprisoned on a forbidden island with all the other villains, sidekicks, evil step-mothers and step-sisters.  These villainous descendants (Carlos, Mal, Evvie and Jay, respectively) are allowed into the kingdom to attend prep school alongside the offspring of iconic Disney heroes including Fairy Godmother, Sleeping Beauty, Rapunzel and Mulan.  However, the evil teens face a dilemma.  Should they follow in their nefarious parents’ footsteps and help all the villains regain power or embrace their innate goodness and save the kingdom?

Guess what?  Kristin Chenoweth of Wicked fame is already being cast as Maleficent, according to Entertainment Weekly. Take that, Angelina Jolie! Chenoweth is brilliant and will bring a comedic edge to this dark role (and will hopefully ban Botox from her kingdom once and for all). I’m still weeping for the loss of her show GCB, so I am always eager to find out what comedic performances she has in store for us next.

Her daughter will be Mal, to be portrayed by Dove Cameron. Jay will be Booboo Stewart, son of Jafar. Evie is — can you guess? — the daughter of the Evil Queen, to be played by Sofia Carson. Of course we can’t overlook Cruella de Vil. Her son Carlos will be navigating the sheer heaven (or is it hell?) that is high school. And finally we have Belle and the Beast’s son Ben, played by Mitchell Hope.

D23 describes these characters as “heritage” characters, that is, characters based on those seen in Disney’s pre-existing works. Live action versions of animated classics are becoming Disney’s next big thing (Maleficent will be one of the first, opening May 30.)

I can’t help but think that Descendants is going to be a mashup. I happen to agree with Meredith Woerner that it’s a mistake to assemble characters from different time periods: Cruella de Vil is from the fifties, Meredith points out. What is she doing in princess land? Also, the names are too obvious, not truly creative in Disney’s usual style: “Evie” for Evil Queen, “Mal” for Maleficent, etc.

Recently the My Little Ponies went to high school in the form of the Equestria Girls, and the result was and is truly cringe-worthy.  I hate to see Disney exploit these timeless classic characters as part of a marketing grab that doesn’t seem well thought out. I hope they prove me wrong!