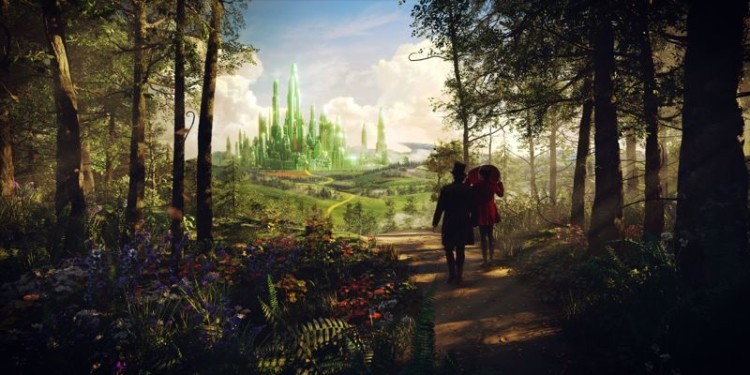 Disney’s OZ THE GREAT AND POWERFUL really had some gi-normous ruby slipper to fill.  I had my reservations going into it.  How could any Oz-related film possibly live up to the original 1939 film classic “The Wizard of Oz?”  I had been disappointed with films that had tried to do it in the past.

Yet from the opening credits, which are quite possibly the most beautiful I’ve seen in any movie, I realized I would be in for a treat.  The opening black-and-white credits recall Thomas Edison’s cinematic inventions from the turn of the last century, along with Victorian imagery and also sideshow motifs.  This establishes the world of the story, which continues in black and white as it opens in this era in Kansas.  A second-rate carnival performer named Oscar Diggs (James Franco) is better known as “The Great and Powerful Oz.”  He is a con artist and womanizer talented with sleight-of-hand tricks.

Oscar is attempting to escape the cuckolded strong man when a tornado sweeps Oscar over the rainbow to an otherworldly place, which, like the original “The Wizard of Oz,” is shown in brilliant color.  Oscar lands in a lagoon full of dazzling flowers and bizarre creatures, and it is here that he meets Theodora (Mila Kunis), one of three witches in Oz.  Theodora believes that Oscar is the incarnation of a prophecy for Oz:  that a great wizard would arrive to rescue the kingdom, which is being destroyed by an evil Wicked Witch.  Oscar wins Theodora’s heart, and, realizing that he will become king if he plays the part of the “great wizard,” he goes along with it.

Upon arriving at the Emerald City, Oscar meets Theodora’s sister, Evanora (Rachel Weitz) who has a sinister demeanor, and commands Oscar, the would-be king, to kill the Wicked Witch if he is to keep his throne.  Oscar thus sets off on a journey to save Oz that will lead to an encounter with Glinda (Michelle Williams), Dorothy’s protector in “The Wizard of Oz.” 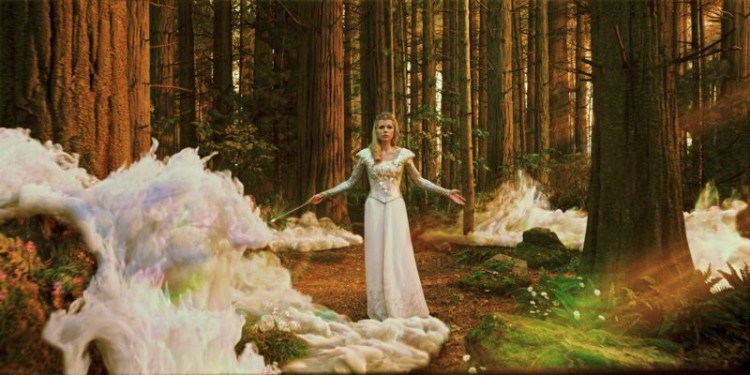 Ultimately one of the three women transforms into the Wicked Witch as we all know and love her, complete with green skin, pointy black hat, and ferocious cackle.  In spite of the wart on her nose, she has gorgeous eyes and is really working the cleavage. 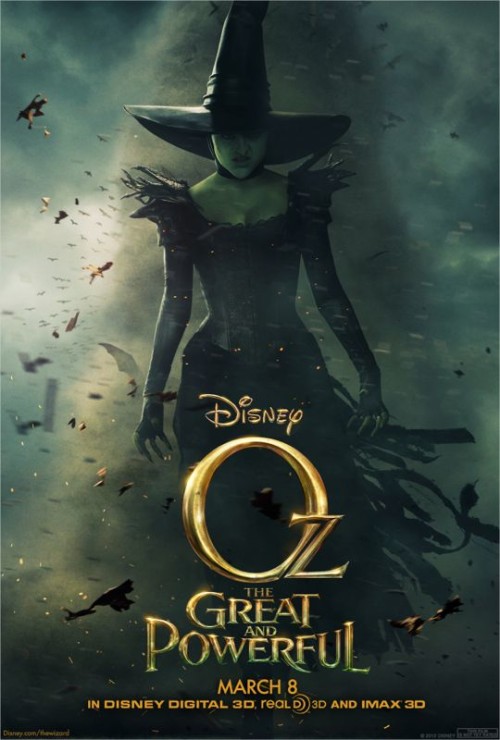 Oscar, meanwhile, has to prove that he is more than just an impostor out for gold.

What I love about this movie is that it doesn’t try to be “The Wizard of Oz,” but rather pays loving homage to it.  Slavishly copying the original would have led to the film’s downfall.  Touches like the hilarious Munchkin dance provide just enough fond reminders of the original. 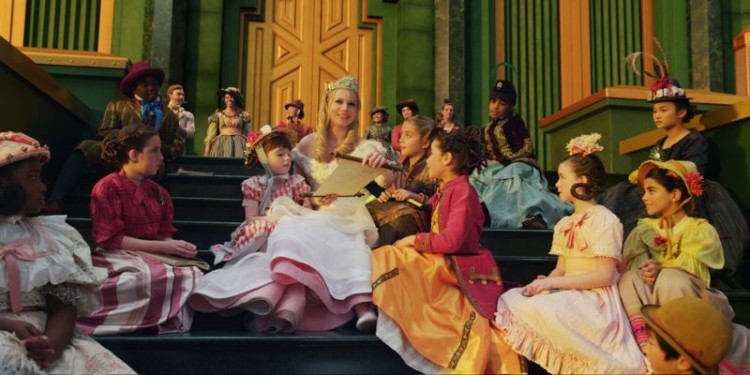 Beyond this, it really is a cinematic marvel.  The production design is flawless, from the rainbow-covered waterfalls of Oz to the Emerald City itself.

One of the new characters introduced is Oscar’s animated sidekick Finley (the voice of Zach Braff), who provides comic relief with his self-deprecating humor and none of the annoyance of a Jar Jar Binks as I was expecting.  And talk about exquisite: I’ve never seen anything like the animation of the porcelain China Girl (the voice of Joey King), Oscar’s other sidekick.

Disney’s OZ THE GREAT AND POWERFUL is edgier than “The Wizard of Oz,” with some mild language, implied sexuality in Oscar’s womanizing, and battle scenes with the Wicked Witch’s baboons that are more intense than the original.  The movie is rated PG, and I’m going to recommend it for ten and up.

Here’s an extended clip from Disney’s OZ THE GREAT AND POWERFUL:

Press materials provided by Disney. All opinions are 100% my own. I really thought this movie was cinema-tastic!