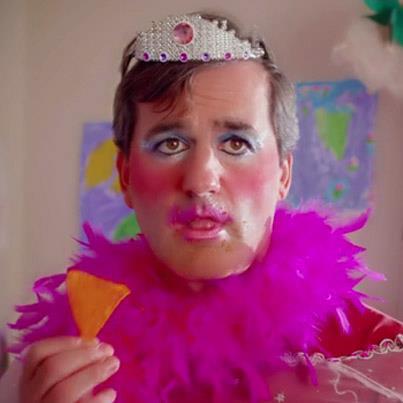 For me my favorite ad during the Super Bowl 2013 was a no brainer: Fashionista Daddy. As mom to a three year old, I’ve seen many times when my husband was invited to one of her “most excellent tea parties.” The tea parties usually include dressing up, and, thanks to a felt play burrito set my brother gave her, usually include “burritos.” Now we’ll have to include Doritos as well. Because who doesn’t love little sticky orange fingerprints all over the house? And that’s just the mess I make after eating them.

The ad was made as part of a filmmaking contest called Crash the Super Bowl 2013, and I can only imagine that the filmmakers are parents themselves. Little girls have a way of casting a magic spell over their daddies and wrapping them around their little fingers to do their bidding. All that sugar and spice just melts their daddies’ hearts, and in the case of this ad, even convinced an unsuspecting dad and his posse of football fans to dress in drag.

Here is the Doritos Super Bowl Ad 2013. Check it out and let me know what you think!