The lovely Geetha has your sneak peek of new movies now playing this weekend with her typical biting wit! We’ve got THE DROP, THE SKELETON TWINS, AT DEVIL’S DOOR and much more opening September 12, 2014. Be sure to follow Geetha on Twitter here!

Be sure to check out Geetha’s sneak peek of DOLPHIN TALE 2 here!

Anyone looking for crime thrillers this weekend will be pleased by THE DROP, a sweet little story set in a seamy Boston neighborhood, and starring Tom Hardy, Noomi Rapace, and James Gandolfini. Tom Hardy is Bob, a bartender in his cousin Marv’s (Gandolfini) bar, which is frequently used by the Chechen mob to hide cash for the night. Tired of being used, Marv engineers a hold-up, and of course, everything goes wrong. Having wisely stayed out of Marv’s plan, Bob tries to focus on caring for the pitbull pup he found among the garbage, but he’s still targeted for trouble by the neighborhood creep (Matthias Schoenaerts), who lays claim to the pup. Rapace stars as Bob’s love interest. If the big names adorning the cast list doesn’t impress you, the screenplay absolutely will.

Do you like creepy, atmospheric thrillers that make no sense whatsoever? Then go see AT THE DEVIL’S DOOR. A real estate agent (Catalina Moreno) tries to sell a haunted house in Los Angeles, and is rewarded by some serious backlash from a malign spirit. Her sister (Naya Rivera/ GLEE) then tries to figure things out and finds Ashley Rickards from MTV’s AWKWARD in there somewhere. Also, there’s a mysterious pregnancy, and, of course, the obligatory creepy little girl (Ava Acres). Director Nick McCarthy sure scored with THE PACT, but this nod to the genre is downright annoying with its tangled storylines. 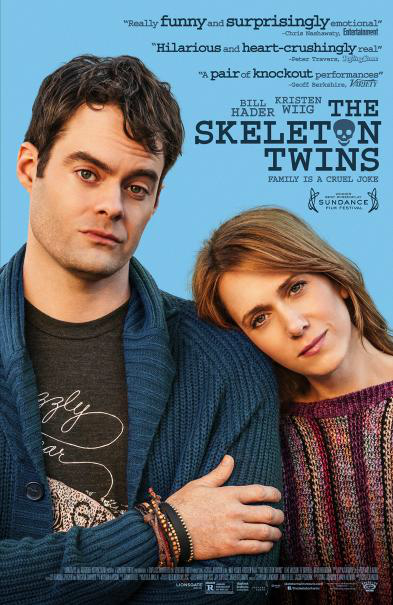 If you slash your wrists in an attempt to kill yourself, be sure to cut along the vein, not across it. Bill Hader plays Milo, the gay brother/ failed actor who commits this rookie mistake and fails in his sad attempt to end his pathetic existence in THE SKELETON TWINS. He’s moved to LA to make it but doesn’t, and hence the above. Kristen Wiig is his sister Maggie, a suburban housewife with the hunky f*kbuddy (Boyd Holbrook) and the nice husband (Luke Wilson). She convinces him to stay with her in upstate NY, and they try to reconnect after years of estrangement. Ty Burrell plays the man from Milo’s past, and Joanna Gleason is the selfish, New-Age mom. The excellent performances are enhanced by a script that bypasses the usual cliches. Still, I vote this a Sundance fave that may… not be worth the $12.

Another flick that may be best left to the Netflix queue may be HONEYMOON. A pair of honeymooners (Rose Leslie/ GAME OF THRONES, DOWNTON ABBEY; Harry Treadway) at a remote cabin by a lake enjoy themselves until one of them is possessed by an alien. Yup, that’s it. And that would’ve been okay, if there had been a better backstory, or other complications. But no, that’s all that’s there. It’s about the husband finding out that his lady is not herself after that one sweet night of lovemaking. The creepy moments in the third act are too little, too late.

And so fall begins. See you at the movies!