Home ☢ Date Night ☢ The Equalizer, This Is Where I Leave You, and more new movies playing September 19, 2014!

We have our weekly lineup of new movies now playing from Geetha right here! This week it’s THE EQUALIZER, THE MAZE RUNNER, THIS IS WHERE I LEAVE YOU, and more. Check out her fantastic sneak peek below to help you decide what to see at the movies this weekend! Be sure to follow Geetha here on Twitter!

You can check out last week’s movie lineup including THE DROP and THE SKELETON TWINS here, and a sneak peek of DOLPHIN TALE 2 here!

Does anyone have a crush on DOWNTON ABBEY’s Dan Stevens? Well, head on over to the theater this weekend and watch him play David, a ‘special ops’ soldier who terrorizes the family of a fallen comrade in THE GUEST. He visits them, charms them, and soon he’s living with them. Only the teenage daughter senses he’s a nut, but those instincts are drowned by raging hormones, because David is totally hot. Soon, bodies begin to pile up. It’s a clever little comedy/ horror thing that might well be worth your hard-earned dollars.

First we had Idris Elba burning up the screen with Taraji Henson, and now we have Denzel upping the sizzle factor as THE EQUALIZER (9/26/2014). I’ve also heard he’s put the word out that he’d love to play James Bond… but I’m not sure Hollywood’s ready to go there just yet. We’ll see.

Anyhow, this weekend has everyone buzzing about THE MAZE RUNNER, a competent if predictable HUNGER GAMES knock-off with a predominantly male cast and some fine special effects. There’s little character development, and the lone female cast member (Kaya Scodelario) with her tiny role seems almost an afterthought.

However, there’s a lot of taut young male flesh to be ogled at, so the project should, at the very least, make its original investment back. In this dystopian flick based on the novel by James Daschner, teenage boys are held in an outdoor prison (the Glade) surrounded by a maze guarded by huge spidery things (the Grievers) that kill escapees. The prisoners are clueless as to how they got there, because their memories have been erased. Thomas (Dylan O’Brien/ TEEN WOLF) becomes their unwitting leader, and with Teresa’s help, accesses his locked memories. Hoping to make this into a series, the creators have deliberately left it open-ended. Good luck with that, fellas. 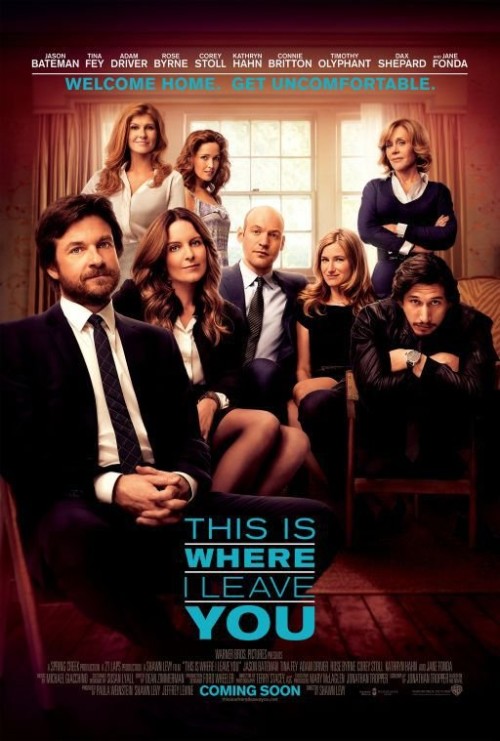 It’s kinda sad to see a group of talented actors playing it safe the way they do in THIS IS WHERE I LEAVE YOU. Tina Fey, Jason Bateman, Corey Stoll (from the Netflix stunner HOUSE OF CARDS), Adam Driver, Jane Fonda—that’s quite a starry cast wasting themselves in this lame flick about four bickering siblings returning to their childhood home after the death of their father. Fonda plays the overbearing, family-therapist mother with the boob job. Lots of eye-rolling, lame punch lines, and laughter-through-tears goop dominate this movie that’s probably best left to the Netflix queue.

Liam Neeson shines this weekend in the polished A WALK AMONG THE TOMBSTONES, as Matt Scudder —- an ex-cop who helps a drug addict find the a*holes who murdered his wife after he pays her ransom. It’s a dark, moody thriller more about character than action — like I said, quite stylish. You won’t find any contrived plot twists, any weary girlfriends, or tough-talking female cops — quite the contrary. In fact, this detective doesn’t even try to hide its old-fashioned views on women. But you’ll find the honesty refreshing, and revel in the excellent acting and well-written script. Be warned: the violence towards women as portrayed by these two sadists will put off anyone squeamish.

SPACE STATION 76 presents something new in the line-up this time—it’s a 70’s style sci-fi comedy about a bunch of charmers on a space station. It’s a feature, but it comes off more like a pilot for a TV show. It certainly has all the requisite crazies: the selfish, sexually repressed captain (Glenn/ Patrick Wilson) that you cannot feel sorry for, even though he’s smarting from the loss of a lover/ first officer; the replacement (Jessica/ Liv Tyler) with her own weird hang- ups; the pill-popping, self-absorbed chick (Misty/ Marisa Coughlan) who ignores her daughter (Sunshine/ Kylie Rogers), and her mechanic pot-loving hubby (Ted/ Matt Bomer); and so on. The big event is the asteroid heading for the station. The characters go absolutely nowhere, and you’re not going to sympathize with any of them—no, if you do go to see this, you’ll go to appreciate the nods to the past as seen in the excellent, retro set design. Here’s hoping the creators will turn it into a TV show.

And that’s the story this time around. See you next time!