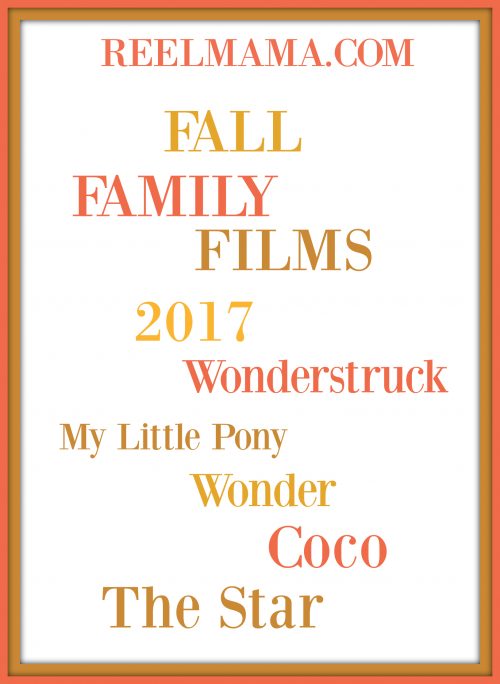 It’s fall! Homework and after-school activities are back in full swing. While our routines are ramping up and summer vacays are behind us, it’s still important to make some quality time with the fam on the weekends. A movie matinee is just the thing. Here are some big releases to look forward to this fall.

The My Little Pony: Friendship is Magic! series on the Hub Network has been a phenomenon with kids and fangirls and boys known as bronies. Now it’s getting the big Hollywood treatment.

British author A.A. Milne finds inspiration from his son to write “Winnie-the-Pooh” and “The House at Pooh Corner” in the 1920s. I’m recommending this one for 13+ due to dark, serious themes of war and examinations of celebrity. Not a feel-good movie but sure to have an interesting perspective.

Prepare to be wonderstruck! Wonderstruck is based on Brian Selznick’s book of the same title. Directed by visionary filmmaerk Todd Haynes, this adaptation promises to be as luminous as the Martin Scorsese-directed Hugo, also based on a book by Selznick. The book’s target audience is middle school-aged children, and I’m going to recommend this movie for 12+, but both the book and the movie truly can be appreciated by all ages.

GKid’s Studio Ghibili festival is on this fall! Of interest to older kids and fans of Japanese anime is Spirited Away. Director Hayao Miyazaki is legendary, and Spirited Away is considered an animated classic full of artistry. The story rooted in Japanese myth may seem a bit strange (the main character Chihiro’s parents are turned into pigs, and she and her family are trapped in an abandoned amusement park), but it’s beautiful and worth a trip to the cinema to see on the big screen.

Pokémon fans, unite! This new anime movie in the Pokémon franchise promises to stay true to the original, classic Pokémon series from the late 1990s. Fans revisit the journey of Ash and Pikachu as they meet for the first time in search of Pokémon Ho-Oh. This promises deeper character development for Ash as he meets friends new and old.

Wonder is based on a hit book for young adult readers recommended by the amazing librarian at my daughter’s school. R.J. Palacio’s movie is the inspirational story of a boy with a facial difference who encounters bullying at his new school, but just wants to prove that he’s just like the other kids. With Julia Roberts and Owen Wilson as the young boy Auggie’s parents, and starring outstanding child actor Jacob Tremblay at the title character. For tweens and older teens.

Disney Pixar has met Day of the Dead (Dia de los muertos, officially on October 31 and November 1 this year). While most families missed the phenomenal animated Book of Life of a similar theme in 2014, Pixar promises to bring a more warmhearted approach to the Mexican festival honoring deceased ancestors. Both Coco and Book of Life provide a feast for the eyes and are excellent viewing for kids 7-10 in the month of November. Book of Life is a brilliant and overlooked movie worth finding for a Halloween screening.

The greatest story ever told, from a donkey’s perspective! Why not? The story of Christmas as seen through the eyes of the animals on the journey to visit the Christ child seems loaded with goofy, anachronistic humor that will entertain kids while being somewhat bearable for parents too. The cast has an impressive pedigree with the likes of Oprah Winfrey and Tyler Perry and the filmmakers were behind Cloudy with a Chance of Meatballs.

I’m looking forward to this one most of all. Based on the children’s book of the same title, Ferdinand is the story of a bull who actually tries not to break a single thing in a China shop. Yes, he has a conscience, and he’s anything but dangerous. Check out the trailer!

See you at the movies!