“Finding Nemo” in 3D is experiencing the film for what it is: a perfect work of art.  “Finding Nemo” is my favorite animated film, from either Pixar, Disney, or Disney Pixar.  It’s no easy feat standing out among classics like “Lady and the Tramp” or “Toy Story” and its sequels (and “Toy Story 3” is brilliant), yet “Nemo” manages to swim above the others as the shining example to which other films, animated or not, can only aspire.

What makes “Nemo” unique is that in each element of the movie, down to the tiniest undulating tentacle or fleeting bubble, director Andrew Stanton and his team achieved perfection, and the final product is beautiful. 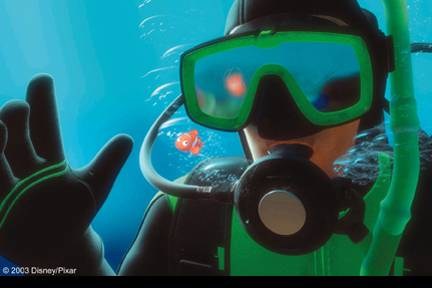 It’s a simple story.  Nemo (voiced by Alexander Gould) is a young clown fish who defies his father Marlon (the voice of Albert Brooks) by swimming into a danger zone known as the drop off.  A diver catches Nemo and takes him away in his boat, sending Marlon on a frantic search through sea, and even on land, for his stolen son.

From a filmmaking perspective, it’s a perfectly structured screenplay.  Danger lurks around every corner for Marlon and Dory (the voice of Ellen DeGeneres), a blue tang fish with a short-term memory problem who joins him along the way. 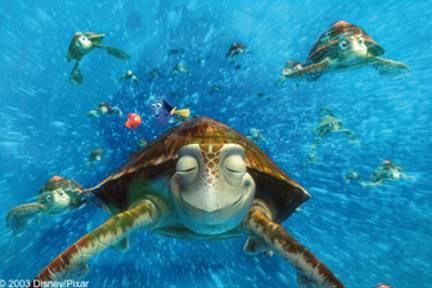 The obstacles seem relentless yet the pacing is just right, taking a break at the ideal moment to introduce Crush (the voice of Andrew Stanton), the surfer-inspired sea turtle, or Nemo’s “initiation” ceremony swimming through the “Ring of Fire” spewing from Mount “Wanna-Hocka-Loogie” (how’s that for a perfect piece of kid humor?) in the aquarium.

Resonances ripple throughout the movie — for example, the importance of Dory’s little mantra “just keep swimming” — and come to bear in the climax.

Visually, “Finding Nemo” is flawless. In glorious 3D you’ll see details that usually go unnoticed on a smaller screen, such as the realistic scratches on Bruce the shark’s face and his crooked teeth.  “Finding Nemo” wasn’t originally made in 3D.  While the 3D conversion may not have the eyepopping effect of a movie originally designed in 3D, the 3D definitely enhances the film.  When Mr. Ray the ray carries his class of school aged fish on his back through the great barrier reef, it’s breathtaking, and even the aquarium where little Nemo eventually finds himself is dazzling.

Here’s my advice to you: don’t miss this one.  Seeing movies in 3D is expensive, but this one is worth the splurge, and it’s as family friendly as you can get. 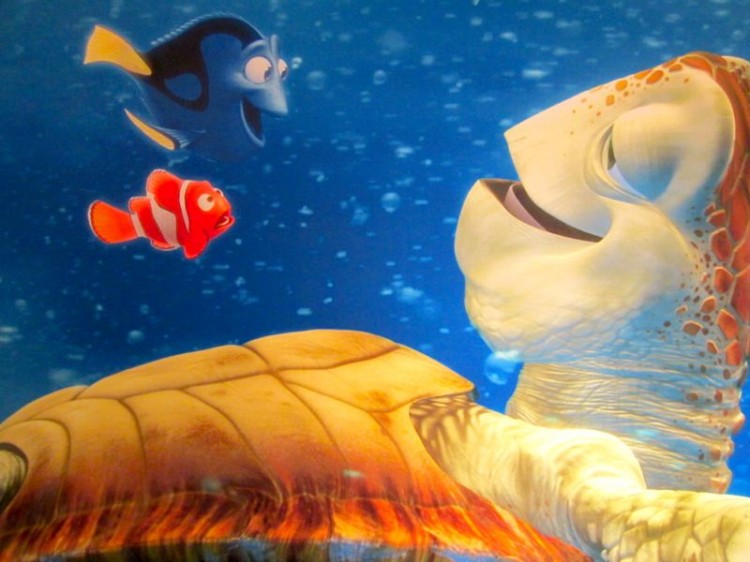 Detail from large display at the “Finding Nemo” exhibit at the El Capitan Theater. Photo by Lauren Ivy Chiong

Your kids will love it, you’ll laugh till you wet your pants, and you’ll probably shed a few tears.  This big screen encore is an experience you’ll never forget. 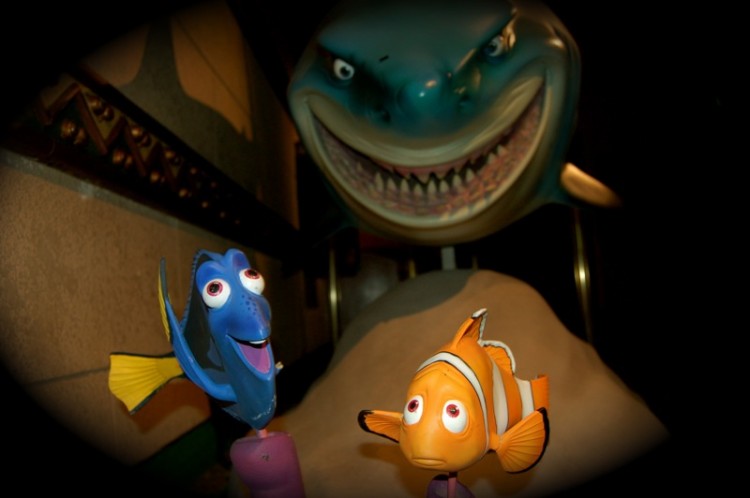 Reel Mama’s Rating: Appropriate for all ages.  “Finding Nemo” is rated G, and after countless viewings I’ve found nothing that would make me think it deserves anything other than a G rating.  There are a few intense chase scenes featuring Bruce our favorite shark and other threatening creatures that might be too scary for kids 4 and under.  Parents with very young kids might want to preview the film first. 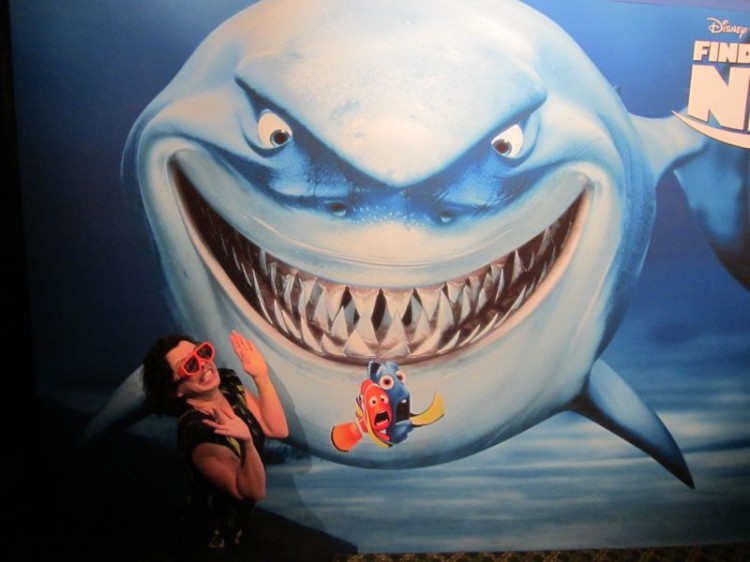 I couldn’t help reacting to Bruce the shark along with Marlon and Dory.

We were fortunate to get to see “Finding Nemo” on its opening day at the El Capitan theater in Hollywood. 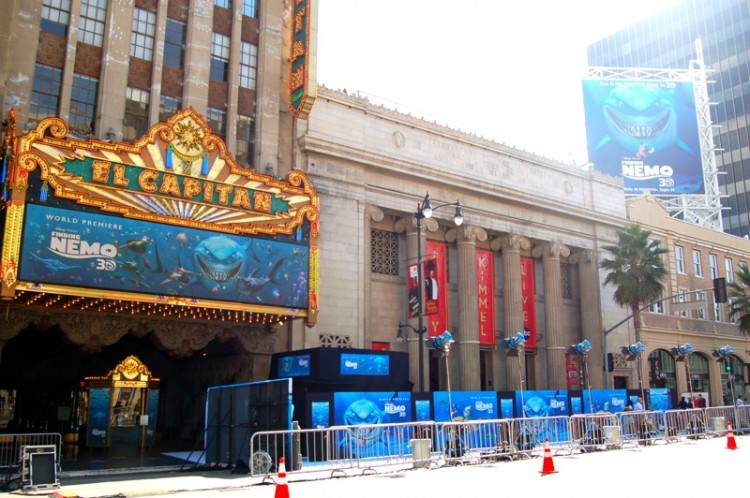 It was a marvelous experience for us.  An overture of Disney classics was performed live on the Wurlitzer Theater organ prior to the show before it was lowered back into the stage with the organist still playing.

The 3D glasses themselves are bound to be collector’s items with their clown-fished-inspired design. 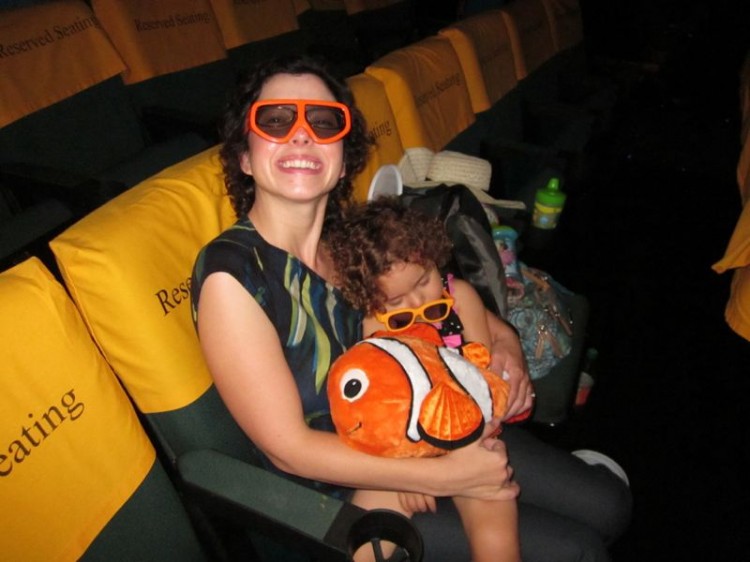 Seeing “Finding Nemo” in 3D at the El Capitan. Leilani loved the movie but nodded off at the end (sweet dreams after a happy ending!). 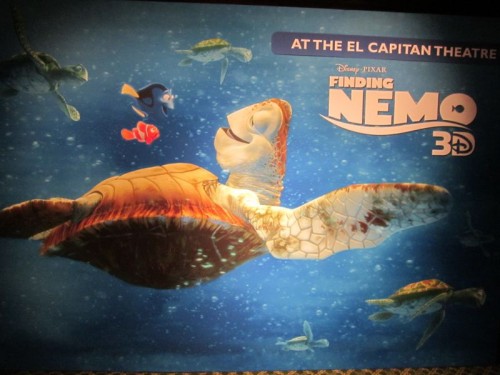 A wonderful touch exhibit of marine life was set up by the Aquarium of the Pacific in the theater’s exhibit space. Each child received a movie poster and “Nemo”-themed coloring and activities pages after the show.

The El Capitan is a restored movie palace originally built in 1926.  It’s an architectural gem. If you are planning a trip to Disneyland, take an afternoon to make a trip to see a screening at the El Capitan in Hollywood.  It’s magical! 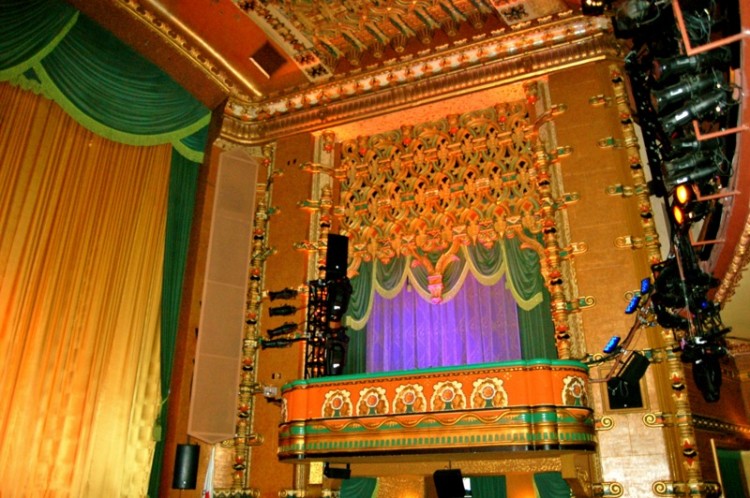