Home ☢ Movies ☢ Geetha’s What To Watch: Glass, Serenity, and more!

Hello folks! I hope things are going well for you? Winter, lovely as it is, always seems to cast a pall on things. But, hey… what’s light without darkness, right? So let’s take a look at what’s new in theaters to light up these dark days… 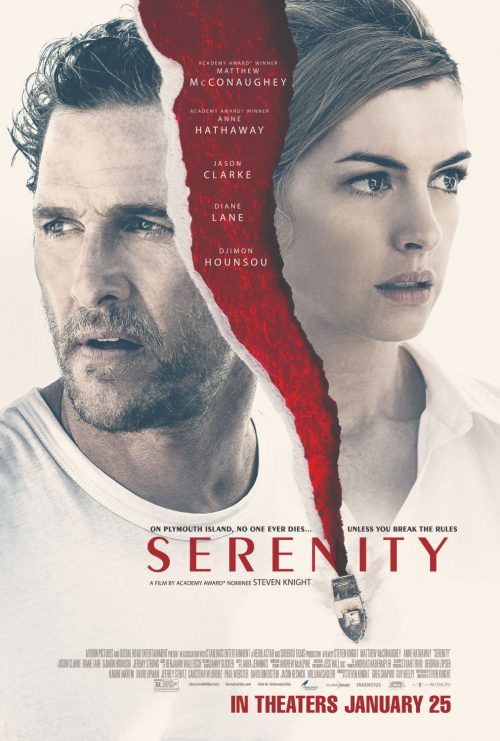 Matthew McConaughey, Anne Hathaway, Diane Lane – all great names, here part of an unfortunate attempt at a noirish sci fi flick. Very sad indeed, since it’s coming from Steven Knight, who’s done some tremendous things in the past (Locke, for one? Most of the scenes in this spellbinding movie are of Tom Hardy driving.). This story is about an Iraq war vet (McConaughey) who’s presently a hard-drinking sailor mostly concerned with netting a big tuna he fondly calls Justice. Once in a while we see him with his girlfriend (Diane Lane). But then his ex (Hathaway) comes to town hoping he’ll help with a certain dark task.

Say it with me… blah, blah, blah! The plot almost doesn’t matter—in any film. In most cases, you can turn a stupid plot into a shining diamond if you have great dialogue in a fab script (and good actors. That requirement has been more than satisfied in this project). Same goes here—the hackneyed plot does not matter. What does matter—hugely- is that the script is sub-par. Now there is a big reveal about two-thirds in, but I’m not really sure you’ll be happy you sat through an hour of nonsense just for that. Here’s the trailer:

We have a new action star! Alright. Gina Rodriguez stars as a woman forced into working for a drug cartel. Eventually she uses her skills to fight her boss. There was no denying the sense of sheer terror that came along with watching the protagonist being forced to work for the cartel—in the original flick. This remake also features Anthony Mackie and Ismael Cruz Cordova in supporting roles. Helmed by Catherine Hardwicke, this female-led flick is generating some interesting social buzz. Here’s the trailer:

How was it for you? For those who don’t know—here’s the story: Kevin (James McAvoy) has surrendered to his dominant personalities (the Horde); and David Dunn (Bruce Willis) now secretly fights crime as the Overseer. Both wind up at Raven Hill—the facility also housing Elijah Price (Samuel Jackson). As Dr. Staple (Sarah Paulson) tries to convince her three patients they’re not superheroes, Price sets up his own plan to show the world that they are indeed that. It’s a nice enough showdown. The acting is excellent, as is the cinematography. But, keep in mind this is more of a psychological thriller – it’s more cerebral than action-oriented. Then you’ll love it.

THE KID WHO WOULD BE KING

Yeah, it’s a YA flick…  and your best bet this weekend. A kid (Louis Ashborne Serkis, son of Andy Serkis/ Snoke, The Last Jedi) runs for his life from schoolyard bullies, and, as he stumbles through a construction site desperately looking for something to arm himself with, yanks a sword-looking thing from a block of… cement? Yup, a sword. Cool! Now he can fight his bullies. The next day he finds out he pulled out… Excalibur.

But the bad news is that sorceress Morgana (Rebecca Ferguson) is also looking for it, and he has to save humanity. So he bands with friends, a sage (Patrick Stewart), and former bullies, and thus begins his journey against Morgana and assorted centuries-old evil warriors. It’s a sweet play on CGI and the stupidity of modern-day blockbusters, served with undercurrents of Spielbergian do-good ideals, set in a dough comprised of YA fantasy and modern-day politics. Yes, it’s possible to that right. Check out this trailer of Joe Cornish’s brilliant effort:

And that’s it for me! As always, it’s lovely to see you all again… I’ve missed you. Here’s hoping I’ll see you at the theater!