Home ☢ Geetha's What to Watch ☢ Geetha’s What To Watch: Spider-Man: Into The Spider-Verse and more!

Hey there, all you lovely people, I trust your holiday preparations are in full swing? I hope so. It’s the best time to make up for hiding the rest of the year, so go out there and get into it! I’m certainly trying my best 🙂 And now onto what’s new and fun in theaters! 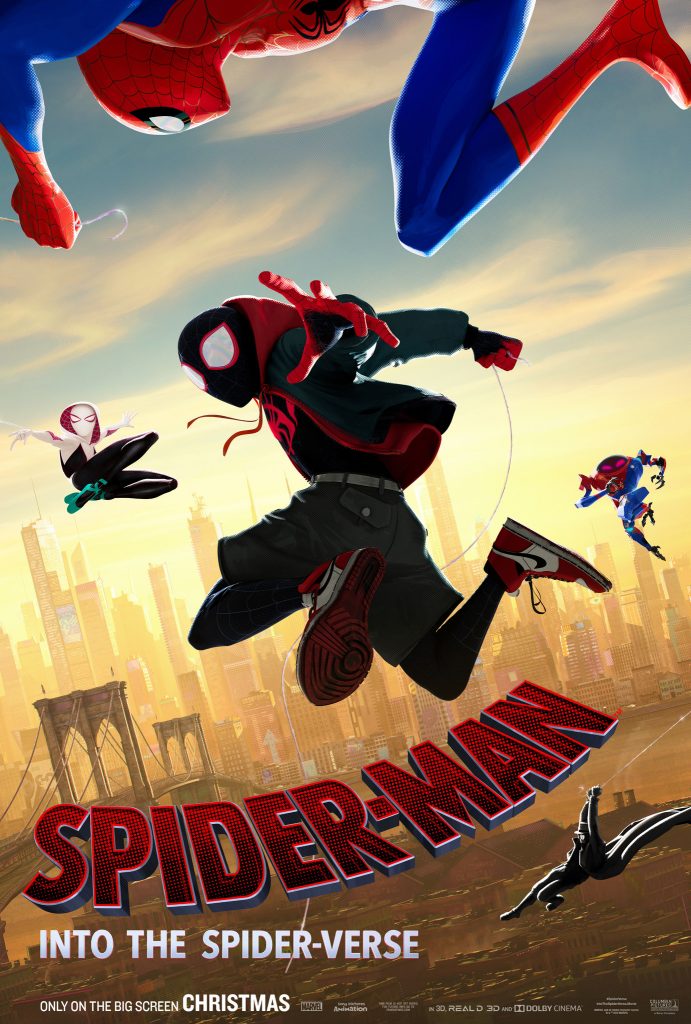 MORTAL ENGINES
After languishing for years, Peter Jackson’s passion project has finally found its way onto screens everywhere. But I’m not so sure it’s worthy of your presence. Homage flicks are fun, sure, but it’s important to pick one theme… not several, as Jackson seems to have done: his Star Wars, LOTR, and The Matrix homages crowd this movie. The resulting mélange is confusing and so unfocused you end up hoping the characters get picked off by any among the plentiful choices of CGI menaces: tanks, ships, fighters, whatever. Plus, the dystopian story with strong-if-empty female characters has been traced over so many times it’s become uninspiring.

For the curious among you, the story is set in a dark future wherein the planet’s major cities have become ‘traveling cities’—the entire city is a huge machine on wheels that travels the globe consuming smaller cities for sustenance. Things get interesting when London consumes young vigilante Hester’s (Hera Hilmar) village. With her assassination plot against Thaddeus Valentine (Hugo Weaving) foiled by the city’s historian Tom Natsworthy (Robert Sheehan), she finds herself dumped outside the city in the midst of a war between the rebels and Valentine’s minions. Stephen Lang also stars as a helpful/ creepy cyborg/ zombie Shrike.

Confused? That’s okay. Focus on the CGI and you just might get your money’s worth out of it 🙂 Here’s the trailer:

THE MULE
Clint Eastwood proves he’s still a force to be reckoned with, in this thriller he directed about a 90-year-old man who becomes a drug mule for the Sinaloa cartel. In an industry that relentlessly kisses up to youth, it’s great to see a veteran kick some a**!

The film is based on the true story of Earl Stone, an impoverished horticulturist who took a job transporting drugs from Chicago to El Paso to make some easy money. Eastwood also stars as Stone. He’s ignored his family for six decades, and it’s while he realizes he needs to make up for it when he begins his fascinating new career. Everything’s peachy until a federal agent (a competent Bradley Cooper) gets wind of the senior citizen’s dealings. The flick hasn’t been shot blockbuster-style (thank God), so the casual pace may annoy those looking for quick thrills. I’m no fan, but I rather like Eastwood’s measured pace and dry humor here. Check out the trailer:

SPIDER-MAN: INTO THE SPIDER-VERSE
This family-friendly flick is a surprisingly winning animation about your everyday teen who gets bitten. It’s especially appealing because it puts the audience into the role of Spidey. Pretty clever on Sony’s part 🙂 Anyhow, the movie begins with the vacuum caused by the absence of Spiderman (Jake Johnson) – thanks to the menace Kingpin (Liev Schreiber). The story then shifts to our everyday hero/ teen Miles Morales, who, to the disapproval of his dad (Brian Tyree Henry), is far more interested in art. One night, when Miles and his uncle (Mahershala Ali) head off to a hidden tunnel of the subway to spray-paint a mural, Miles gets bitten by a spider…

Stand by for our detailed review!

And that’s it for me for this weekend, ladies and gents! See you all at the movies!