Home ☢ Disney ☢ Geetha’s What to Watch: The Force Awakens! … and more

OMG! Stop your online shopping and go get dressed, because it’s here! And more than that—it’s good! Are you folks ready? Or have you already seen it? Tweet me and let me know if you liked it! I cannot remember any other sequel that was more hotly anticipated. I, II and III were a bit of a letdown, so I was seriously excited for THE FORCE AWAKENS. 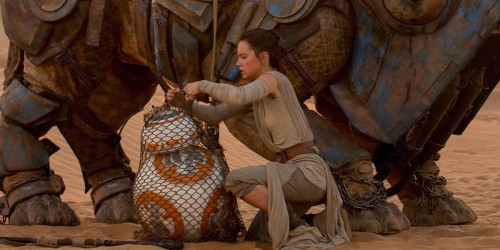 JJ Abrams has apparently gotten his act together, because he’s directed a feature truly worthy of Episodes IV, V, and VI… but it must be noted that he was working off a script from the great Lawrence Kasdan, who penned the later two of the aforementioned wonders. All that fanboy criticism of JJ’s failed Star Treks worked: you won’t find any lens flares or contrived action. Episode VII does what a good sequel should do—build using the past while introducing believable new characters that you actually care about. Daisy Ridley in particular is amazing as Rey, the self-reliant young scavenger living on the desert planet of Jakku, thirty years after the death of Emperor Palpatine. Finn (John Boyega) is a young Stormtrooper who rebels against the brainwashing of the First Order; and the other third of the new trio is Dameron Poe (an excellent Oscar Isaac), a Resistance fighter captured by First Order. But the true star of this sequel is BB8, the droid who plays a crucial role in the story.

As for the Dark Side, Adam Driver portrays the antagonist splendidly as new Dark Lord Kylo Ren. It would’ve been nice to see Gwendoline Christie (Cpt. Phasma, Finn’s ex-superior) and Domhnall Gleeson (a whiny Sith general) in larger roles, but perhaps they’ll get fleshed out in the future two sequels. The same goes for Finn and Rey. All your old friends are there—Leia (Carrie Fisher), Han (Harrison Ford), Chewie (Peter Mayhew), Luke (Mark Hamill), and more. A whole new slew of alien creatures also await you in various locales. The flick is a tad bloody, but other than that, it’s perfect—and even more so in 3D. Lucas actually saw it and gave it the nod—but was that just a publicity stunt? Because you know Disney’s hoping for this sequel to fund its entire FY17 budget (just joking. They’re pretty flush). Here’s the trailer:

SISTERS, the Amy Poehler-Tina Fey vehicle, is a great comedy about two fortyish sisters who, upset at their parents (James Brolin, Dianne Wiest) for selling the home they grew up in to a pair of Manhattan yuppies, throw one last raging party with their high school friends and hard-partying Korean nail technicians. Also starring the amazing Maya Rudolph as the high-school nemesis the sisters hated in their teen years, this features a wonderful script by 30 ROCK and SNL writer Paula Pell. Kate McKinnon, Rachel Dratch, Greta Lee and Ike Barinholtz are among the highlights. It may seem as if the jokes have been spread on there a tad too thick; that there’s a lot of predictability; that there are too many characters entering the story and leaving just as fast with little payoff; and that the film is a bit long. Still, if you do end up seeing this in a theater, you probably won’t regret it. Here’s the trailer:

See you at the movies!