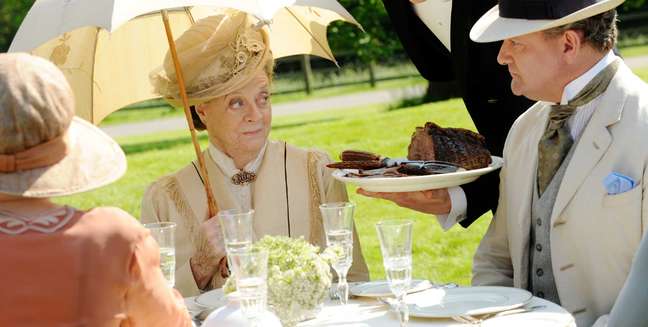 “Downton Abbey” is a feast for the eyes.  It’s beautifully filmed, written, and acted.  I could talk about it as an important and riveting period piece unabashedly scrutinizing the class system in England, but the real secret of its success is that it’s a guilty pleasure.  It’s the story of the Earl of Grantham, his family, and their struggle to hold on to their way of life at their estate known as “Downton Abbey.” 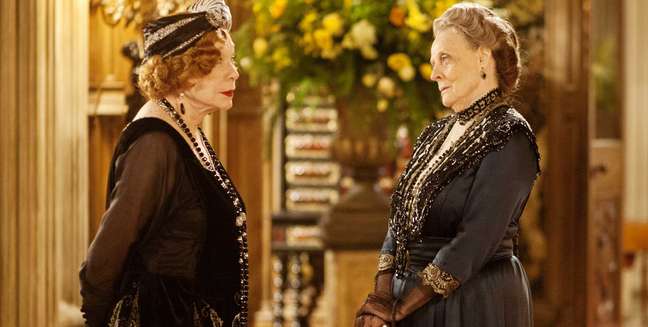 Maggie Smith and Shirley Maclaine snipe at each other in “Downton Abbey.” Wickedly delicious! Photo: PBS

Don’t let the tails and high button collars fool you: “Downton Abbey” is a delicious sudsy soap opera, and the funnest part of all is the cat fights.  No corsets are being ripped off.  I’m talking about the use of words women use to cut each other down to size.  The master (or is it mistress?) of not so veiled insults is Maggie Smith.  I eagerly waited for six months to see Maggie Smith, who plays the Dowager Countess, sniping at Shirley Maclaine, who plays the earl’s American mother-in-law. I wasn’t disappointed during the third season’s premiere on PBS this past Sunday, but it seems that it was Shirley’s Martha who got the upper hand, going “right for the underbelly” in the Dowager’s words.

If Maggie Smith has a lock on costume drama verbal cat fights, then there’s another actress, a little more modern, who is no slouch when it comes to physical TV cat fights: Sofia Vergara on “Modern Family.” 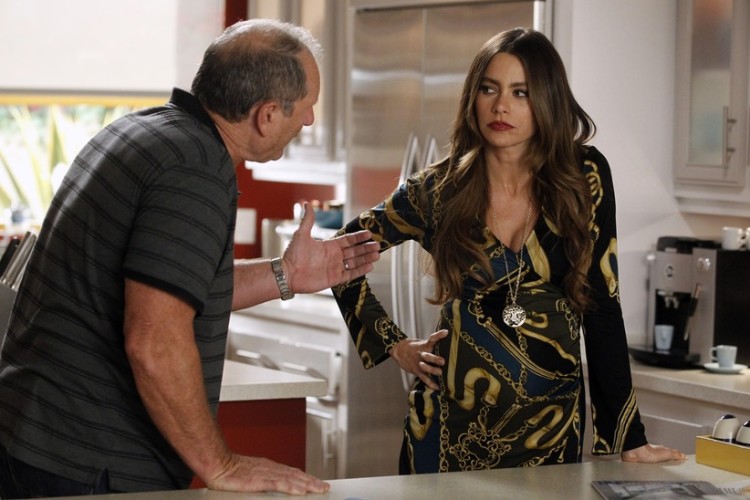 I was reminded of this on a recent episode of “Modern Family,” when Dee Dee (Shelley Long), the ex-wife of Jay Pritchett (Ed O’Neill) returns to claim a photo album, only to run into Jay’s new wife Gloria (Sofia), now pregnant.  A flashback shows several cat fights between Dee Dee and Gloria, but it would be more accurate to say that an imbalanced Dee Dee was attacking Gloria.  Nevertheless, a cat fight is a cat fight.

In spite of the gossip that there’s an ongoing real life cat fight between Sofia Vergara and “Modern Family” co-star Julie Bowen, I can’t comment on Sofia’s propensity for a cat fight in real life.  But I had to do a double take when I saw the bizarre competition that’s going to play out at this year’s Golden Globes.  Both Maggie Smith and Sofia Vergara are vying for the trophy in the Best Performance by an Actress in a Supporting Role in a Series, Mini-series or Motion Picture Made for Television category (that’s quite a mouthful!)  It’s the oddest and most hilarious competition I’ve seen in any awards show, ever.

Could things get ugly?  We can only imagine, and I’ve done just that with the following fictitious exchange between Maggie and Sofia, who I am suggesting meet just before showtime at the Globes.

Sofia: Don’t patronize me with your fancy shmansee Brrrr-itish (rolling the “R” for extra emphasis) accent.

Maggie: You wish to discuss accents? Yours is quite something.  That’s the best acting job I’ve seen in years.  Must be quite the challenge to keep it up all the time.

Sofia: I don’t care about your snooty British friends who take the Oscar away from Americans all the time.

Maggie: Goodness me.  You know, the ampleness of your bosom is not equivalent to the size of your talent.  Or is it the other way round?

Sofia: Caray, I need a mojito.

Maggie: A mo-what-o?  It’s a bit too early in the day for something so exciting.  I need a kidney veal and egg pie sandwich.  Yes, that would hit the spot indeed.

Sofia: Yeah, go chew on a kidney. I’m gonna win this thing!  Wait a minute, I’m sorry, this could be the last time you’re ever nominated.  I have my whole life ahead of me.  Forgive me?

And so we shall see which of these fine actresses walks home with the trophy.  I love Sofia, but I’m partial to Maggie.  She’s a living legend, and when it comes to delivery, no actress can match her.  We shall see!

UPDATE 1/13/13: Maggie Smith was awarded the Globe.  Sofia seemed to take it well.

Check out these other posts about the Golden Globes 2013!

The Golden Globes 2013 Nominees (and some predictions)

What’s the difference between the Golden Globes and the Oscars?