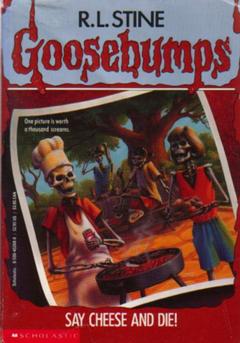 What was Ryan Gosling doing before Hollywood superstardom came knocking at his door? Appearing in “Say Cheese and Die,” an episode of the 1990s campy kids’ Goosebumps TV show, based on the wildly successful kids’ horror books by R.L. Stine of the same title. (Available on DVD here through Amazon.)

The series ran from 1995 to 1998 and is now being released on DVD and broadcast on the Hub.

Horror for children might seem like an oxymoron of sorts, but kids LOVE to read about characters their own age in scary situations (i.e., the even more wildly successful “Harry Potter” series), as long as they can be reassured in the back of their minds that everything is going to turn out okay in the end. Stine nailed that formula in the “Goosebumps” series, both in the books and on the TV show.

Kids eat it up, and parents will find the child protagonists’ semi-life-threatening situations in the books and TV show acceptable for kids nine to thirteen.

The production values of the TV episodes aren’t stellar. In fact, they’re downright campy, but I think kids, while used the spectacular visuals of the “Harry Potter” films, will still find them to be entertaining and fun. Parents can often be hard pressed to find spine-tingling viewing material for their tweens’ slumber and Halloween parties.  Many Halloween specials are baby stuff, and most horror films are far too mature. These TV shows contain no bad language , other than some name-calling, and the only gore your likely to find is in the form of green slime.

Each episode is about 20 minutes, so rent several at one time if you’re planning a movie marathon for your kids. A “Goosebumps” movie is reportedly in the works.

Reel Mama’s recommendation: Appropriate for age nine and up. With names like “It Came from Under the Kitchen Sink,” the shows can be creepy and weird. Most episodes contain at least one intensely scary scene, so parents of younger tweens may want to preview the film.

Horror for kids is a tough genre to crack when it comes to film and TV. Disney has tried off and on over the years with mixed results (it worked in the case of “The Watcher in the Woods.”) There have also been some misses, with The Descendants being the most obvious.

The Goosebumps TV show Season 1 DVD is available on Amazon here and also for streaming with Amazon video.