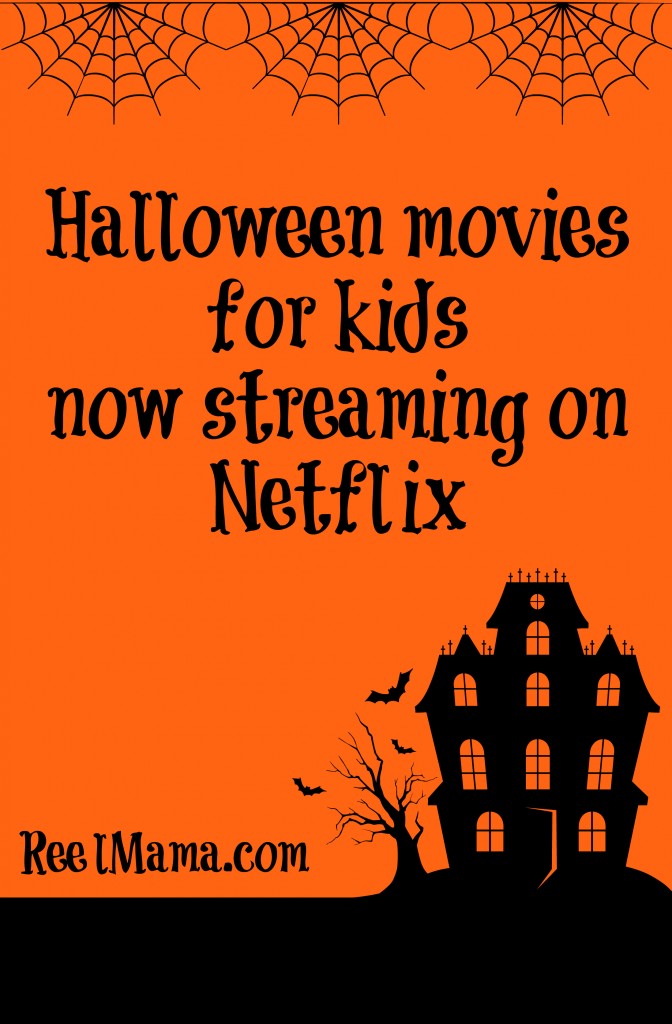 Did you know there’s a wide selection of Halloween movies and shows for kids streaming on Netflix? I have listed here for you over 25 that are a great way to kick off the spooky (or not so spooky) fun. I’ve listed them by age level.

My daughter and I are currently working our way through this list. We haven’t watched everything, so if you and your kids love or hate a selection, please share it in the comments section–whether your reaction is “amazing,” “meh,” or anything in between. Happy viewing!

Need a yummy treat to munch on while enjoying your screening? Check out my roundup of 25+ popcorn recipes!

This is one of my top recommendations for a Halloween movie for young kids. It’s the very family-friendly story of a kind witch who invites a number of animal friends to ride on her broom. Full review here.

Very family friend selection from PBS kids is spook free and will help your little tyke enjoy some Halloween fun.

Hang on to your hats and get ready for a spook-tacular good time, with Curious George. Autumn is here, bringing colorful leaves, hay rides, pumpkin patches, and the annual Boo Festival.

Can you stand to sit through a Barney and Friends movie like I did? Your child will squeal in delight, and you, dear parent, will try not to lose your mind. But this selection is absolutely perfect for little kids. My 5-year-old LOVED IT. Includes more palatable Angelina Ballerina and others as well.

Beloved characters teach little ones how to share in the excitement and fun of Halloween in this scare-free collection of shows.

The Buddies are an all-time favorite at my house. My daughter says, “It’s a little scary to me, but now that I’m five, it’s gonna be great!”

At Halloween, the Buddies, Air Bud’s adventure-seeking pups, investigate mysterious happenings at a mansion reportedly haunted by the Halloween Hound.

When bad guys take over the Mouse House, who do you call to save the day? Mickey and his pals, of course!

This movie is a classic! Yes, it will seem dated to older children, as this review on Common Sense Media points out, but many parents grew up with this film as a slumber party favorite.

Two orphans with superpowers try to avoid the clutches of a couple of schemers who are posing as loving relatives to exploit the kids’ abilities.

Shrek at Halloween! How can you go wrong?

Shrek dares his friends to bring on the scary with ghost stories told in a haunted castle. Later, Ginormica and the Monsters face alien pumpkins.

The Shrek characters parody the music video “Thriller”; B.O.B. and pals battle zombie carrots; and Megamind faces the effects of the Button of Doom.

Casper the Friendly Ghost is sent away to a boarding school that specializes in teaching young students how to be as scary as possible.

Scooby-Doo is a fun cartoon for kids and a nostalgic fave for parents. Just don’t overdo it on the Scooby snacks…I mean popcorn!

In this animated update of the cartoon classic, Scooby-Doo, Shaggy and their pals solve spooky mysteries in a hamlet bedeviled by supernatural bedlam.

Something tells me your little Power Ranger will like this one! And it’s short and sweet.

On Halloween night, the creepiest creatures from the Netherworld trade war stories about their battles with the Samurai Power Rangers.

Every night at midnight, the Little Ghost gets an hour of freedom. But he’s never seen the light of day until a fateful meeting alters his perspective.

A Disney movie very well-reviewed by kids and parents on Netflix.

Teenager Skylar Lewis discovers that her parents have a secret avocation when she innocently releases a cache of monsters in the family basement.

Alvin and the Chipmunks Meet Frankenstein

Alvin and the Chipmunks Meet the Wolfman

In Spooksville, new kid Adam joins forces with two other teens to battle dark forces that have been plaguing the town for centuries.

Check out my review of the Goosebumps series here. It’s a fun if a little dated companion to the books for older kids.

R.L. Stine’s tales take on a life of their own in a series that combines original stories with adaptations drawn from the popular books.

After discovering a pair of young ghosts, a nebbish 11-year-old agrees to help the sibling spirits solve the mystery surrounding their demise.

Max and Cammy’s first date — on Halloween night — is interrupted by Phears, a specter who plans to take over the world.

I didn’t love this movie at the theater. There’s some disturbing imagery surrounding the villain, but the animation itself makes the movie a true work of art.

When a cruel exterminator tries to destroy the band of impish creatures that adopted young orphan Eggs, he and a bold rich girl come to the rescue.

“Great movie for kids, not so much for teens and adults,” says one Netflix viewer. It’s a dog movie with a monster theme — fits the bill for a Halloween movie on a weeknight or Saturday afternoon.

An enduring friendship forms when a boy adopts Fang, a 600-year-old vampire dog, and together they try to stop a mad scientist who wants Fang’s DNA.

This wonderfully creative movie has a monster theme that will be fun for Halloween.

Emile and Raoul join forces with a singer and an eccentric scientist and his monkey to save a misunderstood monster from the city’s police chief.

I’m not a fan of Monster High, but nine-year-old girls are. There are many Monster High selections available on Netflix. This is a brand new one.

Cleo is invited to a gala in the big city celebrating a magical comet and brings her best friends along. But the sinister Nefera has other plans.

Hearing that their old school is being haunted, Spectra Vondergeist and her pals head back to Monster High to get to the bottom of the scary spookery.

Two seasons are available of this beloved 1960s show. This is a great selection if you have kids of different ages. Parents who grew up with this (like me) will love revisiting the series.

Herman and Lily Munster are just your typical ghouls-next-door … with a vampire grandpa, a werewolf son and a normal-looking niece.

Teenage zombie Dixie has her hands full trying to save the world while planning a Halloween party and running the student council.

This cult classic is entertaining and hilarious. Older kids will enjoy this loving tribute to the black-and-white creepy show parents grew up with.

Stepping out of the pages of Charles Addams’ cartoons and the 1960s television series, members of the beloved, macabre family take to the big screen.

When a traveling horror show comes to down, Danville high schoolers can’t wait to check it out. But the sinister showman has an evil agenda.

Let me know if you or your child gets a chance to watch these Halloween movies and shows for kids!