I don’t have to think, if I hit “publish,” will I be shot down? Fourteen-year-old Malala Yousufzai lived in fear of being beheaded by the Taliban for her blogging about their attempts to prevent young women from being educated.  Then the Taliban made an attempt on her life when they shot her in the head.  Miraculously, she survived,  but she is still in danger.  The Taliban insists that they will not back down.

If I were arrested for blogging, would I have the courage to stay true to my beliefs, to stand up for freedom of speech no matter what like Malala?  I believe I would.  Around the world, people’s voices are silenced every day by totalitarian regimes.  I believe in my heart of hearts that we need to protect freedom of speech, and never take it for granted.

The story of Marcos Máiquel Lima Cruz, who is sitting behind bars in Cuba as I write, particularly hit home for me.  My husband’s family left Cuba in 1980 to build a better life for themselves.  They needed a place where they could speak freely, without fear of arrest.  When word spread in Cuba that they were leaving, their home was attacked by furious neighbors.  The authorities made them give up everything they had when they left for America.

In Cuba, change is slow in coming.  I’ve met many people who have traveled there, extolling the virtues of the beautiful island, the festive atmosphere, the warm people.  All of this is true, but I fear what they are seeing is the Cuba for tourists. The Cuba the government wants to present to the world. I feel that many of these travelers haven’t seen the ugly side of Cuba.

Marcos was arrested for playing hip hop music with lyrics critical of the government, jailed for dancing to music with a message he believed in.  To this I say, “NO MAS!”

“No mas!” is a powerful statement.  In Spanish it translates to “no more,” but what it really means is, “We’re not going to take it anymore!” 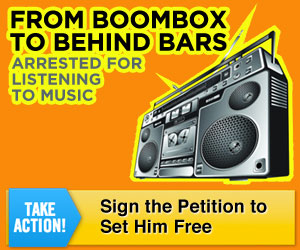 I hope you will join me in signing the petition to free Marcos.  We are fortunate to live in a country where we can make our voices heard.  Sign the petition to give Marcos hope that one day his country will no longer force its people to live under the dark shadow of oppression, with sham elections and people getting imprisoned for saying what they need to say.  For hitting “publish.”

I’m thrilled to participate in the campaign to free Marcos and celebrate freedom of expression.

Join me every Monday in February at 11am PST on Twitter: @TakePart for a live Twitter chat with celebrities, experts and activists as they explore the issue of free speech. Follow @TakePart and use #NoMas to ask your questions. 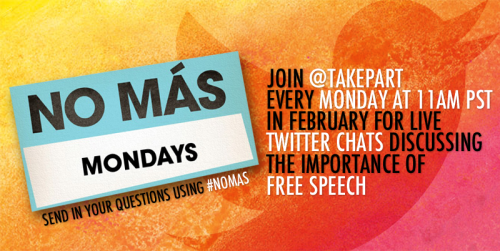 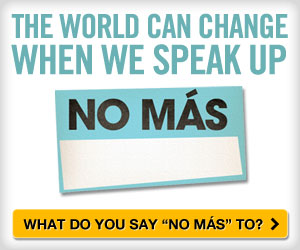 What do you want to say “No mas” to?  Perhaps hunger? Domestic violence?  Create your own “No Mas” badge with an issue you care about and share it with the world.  Or have fun with it if you like: “No mas jaywalkers,” “No mas bad French fries.”  It’s up to you–get creative!  Use this link to create your own downloadable “No Mas” badge.

Disclosure: This post was brought to you by Linqia.