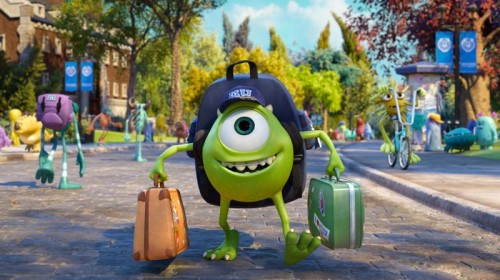 Ah those bright college years…The libraries, the studying, chugging coffee to pull all nighters and study some more. Those were the days. Okay, I didn’t go to a party school, which is why I relate so much to Mike Wazowski. For those who haven’t seen Monsters Inc., Mike (the voice talents of Billy Crystal) is an ernest, focused little green cyclops. He may be a little on the nerdy side, but when he wants something in life, he pursues it with the singular focus his one large eye would suggest. Which is exactly why he’s a straight-A student at Monsters University…until a scuffle with Sulley (the voice talents of John Goodman) throws things off track.

Monsters University takes place about a decade before Monsters Inc.  It’s a prequel and gives the backstory of these scary sidekicks Mike and Sulley, and the rivalry that ultimately becomes a friendship.  Sulley, aka James Sullivan, is the college jock and big man on campus. This is well before his days as a top scarer at Monsters Inc, and he doesn’t try very hard in class because he’s riding on the coat tails of his family name (the name Sullivan is synonymous with scary in Monstropolis.) 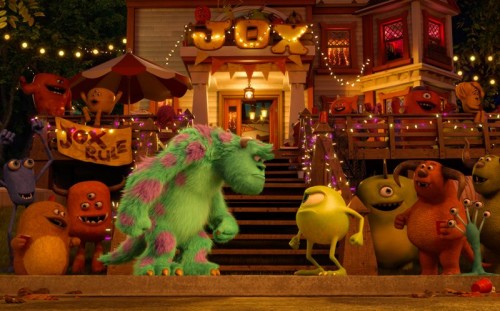 Mike and Sulley square off in Monsters University

Mike and Sulley are immediately at odds, and their conflict ultimately does not sit well with Dean Hardscrabble (the voice talents of Helen Mirren). Mirren, the actor’s actor, lends a terrifying tenor to her dragon-slash-scorpion-slash-millipede creature. Mike and Sully threaten to destroy each other’s academic careers and dreams of succeeding as select members of the scaring major. 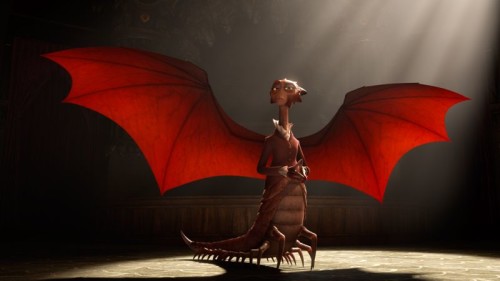 There are many standout new characters not previously seen in Monsters Inc., and as a mom, it’s hard not to love Mrs. Squibbles (the voice of Julia Sweeney). The fraternity Oozma Kappa, which Sulley and Mike ultimately join, is based in her home, because one of its members, Squishy Squibbles, is still living there (probably in the basement). Mrs. Squibbles steals the show with her sweet-natured yet oblivious attempts to cater to every need of Squishy and his friends. Her floral housecoat is adorable (I want one!) 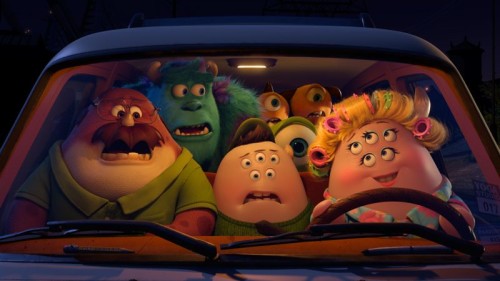 Mrs. Squibbles is a sweet, doting, and oblivious mommy in Monsters University

As a family movie reviewer, I eagerly anticipate G-rated films as soon as they hit the theaters or become available on DVD. In fact, G-rated movies are few and far between, mostly because studios got wind of the fact that older kids think the G-rating indicates baby stuff. Most kids’ film these days are PG and contain just enough rude humor or slapstick violence to keep it a hair’s breath away from G. 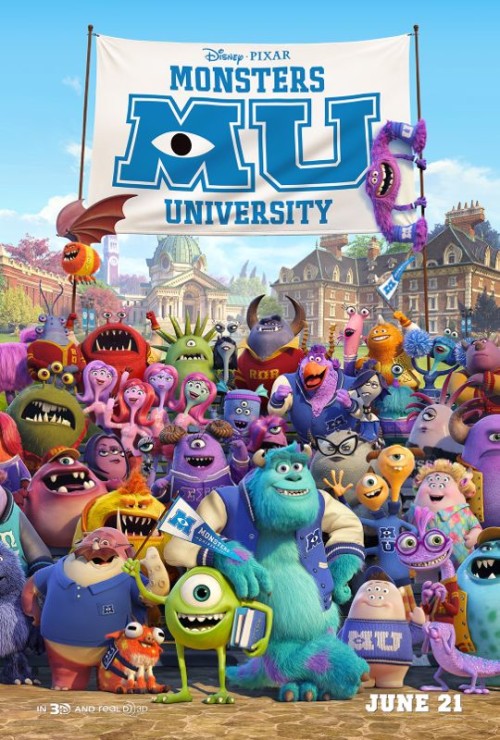 Yet I love that Disney Pixar is fearless in this regard and will deliver those G-ratings time and again. Parents can breath a sigh of relief and feel good about taking their eight-year-old AND their preschooler to Monsters University, and everybody can have fun.

Monsters University is a safe choice for kids of all ages. You’d think that with portraying frat parties it would be delivering on the impossible, but Monsters University really doesn’t contain anything that parents will find objectionable except perhaps some very mild rude humor and references to college pranks. The monsters ARE scary at times, so if your child has issues with this, it might be good to have a comforting conversation beforehand.

Without giving away too much, in the end, the message of the movie may not quite be what parents want their kids to hear when it comes to the importance of higher education to succeed in life. Nevertheless, the final message is a positive one: that through hard work and sheer determination, dreams really do come true, especially in America, I mean, Monstropolis.

I know the anticipation must be killing you! Here are some Monsters University teaser clips for you to enjoy:

Get a glimpse of Mike & Sulley’s first morning as members of the Oozma Kappa brotherhood.

Sulley’s capture of the Archie, the rival school’s mascot, just might be enough to make him worthy of joining the leading fraternity on campus: Roar Omega Roar.