Disclosure: I received a complimentary copy of the My Little Pony Equestria Girls DVD for review purposes, and all opinions are 100% my own. 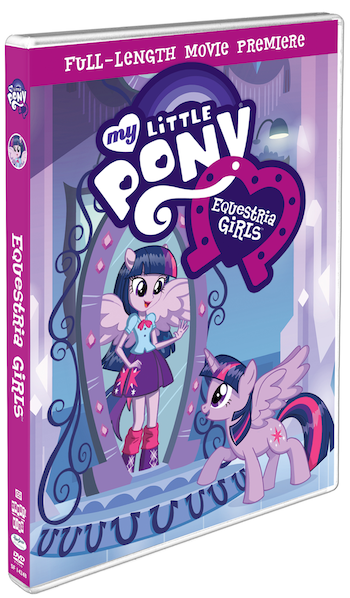 Have you ever wondered what would happen if the My Little Pony characters we know and love were transformed into teenage girls so that they could leave their magical kingdom in order to experience the roller coaster of high school?  No?  I hadn’t either, but the folks at Hasbro did, in response to consumer demand to “experience the brand in new ways,” according to the New York Times.

In reality, the human incarnations of the ponies are more than likely driven by Hasbro’s desire to expand its merchandising reach to be able to compete with the likes of Barbie, Disney Princess dolls, Monsters High (their lack of clothing is scary) and my least favorite of the bunch to be found in the girls’ toy aisle, Bratz dolls.  Hasbro is introducing the new product line with a feature-length film called My Little Pony Equestria Girls, which first played in select theaters, and is now available on DVD.

If you’ve read my other reviews of the Hub’s My Little Pony series on DVD, you know that I’m a big fan of the show.  The My Little Pony characters do look drastically different than they did when I played with them growing up, but this doesn’t bother me.  While the slim down wasn’t necessary, these ponies are stylized for the series with a Japanese anime look: huge eyes, big vibrant colors, and absolutely adorable.

The other thing I love about the series is its cleverness.  The dialogue is really funny, reflecting a hyper awareness of its own over-the-top cuteness and being able to laugh at itself while having fun with the audience.  Each of the characters has her own sparkling personality, and each one is memorable for that reason.

One of the main characters of the My Little Pony Friendship is Magic series is a purple unicorn named Twilight Sparkle.  In the series, Twilight Sparkle is rewarded with princess status after years of hard work and study.  At the beginning of Equestria Girls, Twilight Sparkle is on her way to visit the Crystal Empire with her pony friends Pinkie Pie, Apple Jack, Fluttershy, Rainbow Dash, and Rarity.

Chaos ensues when Twilight Sparkle’s crown is stolen by Sunset Shimmer, a pony who has strayed from the teachings of mentor Princess Celestia.  Sunset Shimmer disappears through a magic mirror, a “gateway to another world” leading to a parallel universe where she takes on a different (human) form. It’s a pretext to be able to transform the ponies into their alter teen girl egos.  There is a teen counterpart for each of the ponies already existing in the high school human world, except for Twilight Sparkle, who is shocked at her own transformation.  In order to recover the crown, Twilight Sparkle must compete against Sunset Shimmer in the fall formal to be named its princess.

At Canterlot High School, Twilight Sparkle’s “princess” status is achieved through a high school popularity contest.  This did bother me.  The movie struggles to stay true to the spirit of the My Little Pony series, but at times feels just as lost as Twilight Sparkle when she finds herself in high school and has to learn how to walk on two legs instead of four, and use hands to eat, write, etc.

Sometimes the story meanders, and at 72 minutes, it seems it was a challenge for the film’s creators to force it to reach feature length.  I think this movie would have been better divided into three twenty-minute TV episodes and shown on the Hub as part of the series.

I think kids age six to eight will enjoy My Little Pony Equestria Girls.  It won’t bother them that the story meanders, and kids will enjoy the musical numbers made popular in the series.  I wouldn’t recommend the movie for younger than six, because Sunset Shimmer is transformed into the high school’s mean girl, and she says some pretty nasty things that will require a bit of maturity for kids to process.  There is also one really intense scene near the end when…SPOILER ALERT…

She is transformed into a dragon!

This movie is a pretty good choice for a slumber party, or if you just feel like curling up with your kids to have a movie party on a Saturday afternoon.  The positive message of friendship is still there, and that’s the heart and soul of the series, and this time that message is enhanced with one about standing up to bullies.