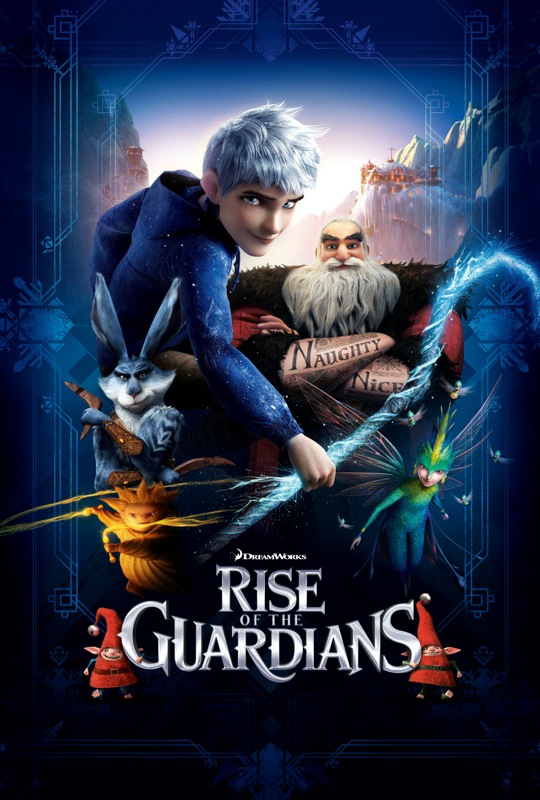 I admit it. I still believe in Santa Clause. And this past Easter, when girl and boy scout troops filled over a million easter eggs with candy for the Easter egg hunts around town, well, that reminded me that the Easter Bunny is real too. The Tooth Fairy? What can I say? I can’t look at a quarter without recalling getting one from her under my pillow each time I lost a tooth. The Sandman? He brings me a dream every night.

You can imagine my excitement when I first saw the trailer for Dreamworks Animation’s “Rise of the Guardians,” which brings these beloved figures of childhood together in friendship to defend children’s belief in them, imagination, and in the possibility magic itself. They call themselves the Guardians, a kind of Justice League or Avengers for the under 10 set, and they are called to action when the Boogie Man known as Pitch (the voice of Jude Law relishing his role as the bad guy) threatens to destroy all children’s happy dreams with nightmares.

At the heart of the story is Jack Frost, with the gentle voice of Chris Pine. Immortal, he spends his carefree days making mischief in a winter wonderland and delighting children. But there’s a problem: not only can they not see him, but they don’t believe in him. When the Man in the Moon calls him to join the Guardians, he’s completely thrown off. Why him? He doesn’t feel up to the challenge, and he’s not sure he wants to be.

It’s fascinating to see these favorite characters rendered in an entirely new light. As we discussed in my exclusive interview with the film’s executive producer, William Joyce, also the author of the children’s books “The Guardians of Childhood” upon which the movies are based, the back stories of these archetypes are poorly developed in the popular imagination. What do we really know about Santa Clause, besides the basics (North Pole, workshop full of elves making toys, etc.)? This gave the filmmakers, beginning with Joyce, tremendous creative license when interpreting these characters for the big screen.

Take the Easter Bunny, for instance. You might be envisioning the Cadbury bunny, a cute fluffy albino bunny with a wiggling nose. Not this time. The Easter Bunny has been transformed into a lean boomerang-wielding machine with an Aussie accent and a complex because he constantly has to combat the public’s concept of him as “cute.” Hugh Jackman gives this character his voice, and he manages to make the defensiveness endearing.

The movie has one the most fun renditions of Santa Clause I can remember. Santa, who goes by North, has a thick Russian accent, (voiced with gusto by Alec Baldwin) which makes sense, considering that this is St. Nicholas’ country of origin. He also has tattoos on each arm: one says “naughty,” and the other says “nice.” He doesn’t ride a Harley instead of a sleigh, but while he’s a tough guy, he’s a big teddy bear inside who loves cookies and is quite a perfectionist when it comes to his toys. And by the way, yetis, not elves, make the toys.

Other highlights include the voice of Isla Fisher as Tooth, who as it turns out is fascinated by blood and little bits of gum on the teeth she collects. Among the children one of the fun standouts is Cupcake, the voice of Dominique Grund (a young actress who started her career as the baby in “Mad About You” in 1997). Cupcake’s love of pink, ponies, and tutus would seem to be at odds with her imposing stature. Not at all. Joyce and his team build their characters from the inside out, with heart, ensuring that they are unique, often quirky, and totally believable.

The story is so outstanding that I haven’t even commented on the dazzling animation. This movie is on par with Pixar’s “Brave” (see my review here) in its incredible rendering of details. From Jack Frost’s hair to the golden dreams of children where dinosaurs and unicorns roam the streets, every frame seems enchanted.

The film has a lively pace in keeping with the Guardians’ urgent task. At one point North/Santa points out that the Guardians are so busy bringing joy to children, that they don’t have time to spend with the children themselves. In the course of the movie they, and especially Jack, get to know children and the incredible power their imagination holds. Jack finds his place in the universe, and the movie finds a place in our hearts.

I can’t remember the last time I saw a movie where the audience applauded and cheered as the credits rolled. The film struck a chord with the audience without ever getting too sentimental. With “Rise of the Guardians,” parents will revisit childhood memories, and their kids will have the chance to make new ones.

Reel Mama’s recommendation: Age six and up. Pitch’s nightmare horses are scary, even a little apocalyptic, and they appear at various moments throughout the movie, which also contains the battle scenes necessary for the guardians to guard childhood. These scenes are pretty intense, so parents with very young children might want to preview the film. The Bunny’s language never gets more salty than “bloody.” Pitch tells him to “go suck an egg,” which makes him defensive all over again. One of the characters dies but comes back to life at the end of the film.