There are so many artistic elements that go into making a movie.  The most important introduction of a movie to the public is its poster, but posters often go unappreciated as real works of art.  Wednesdays are often a time when we reflect on a photo that captures something magical through a Wordless Wednesday post. 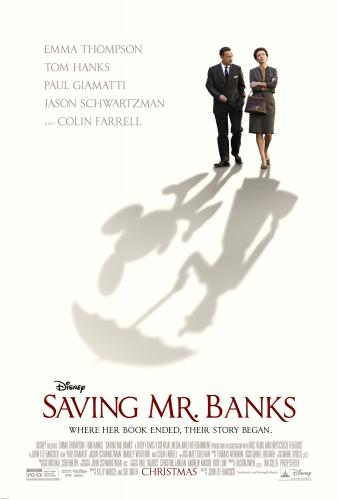 Today I wanted to try something different, and reflect on the magic that a special movie poster for Saving Mr. Banks captures.  In filmmaking there’s an expression: “Show, don’t tell,” and this picture reveals a thousand words about the film’s subject, theme, characters, and so much more.

In the film, Emma Thompson plays PL Travers, the author of the Mary Poppins book series.  Tom Hanks plays Walt Disney, the legendary studio head who had a passion for bringing Mary Poppins to the big screen.  PL Travers’ shadow is that of Mary Poppins, and she’s resolutely against Disney’s overtures (even when his shadow is the irresistible Mickey Mouse).  Personally, I love everyone represented on this poster: Emma Thompson, Tom Hanks, Walt Disney, PL Travers, and Mickey Mouse.  The poster beautifully captures the story with sheer artistry.

I predict that this is going to be the feel-good hit of the holiday season.

Does this poster want to make you see this movie?