Disclosure: I was provided with a review copy of Sofia the First Ready to Be A Princess DVD.

Sofia the First Ready to Be a Princess DVD review 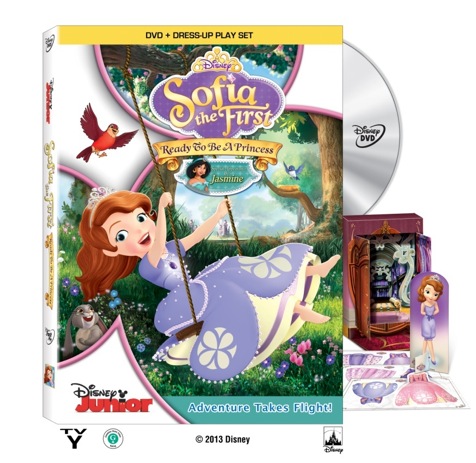 There is a brand new show from Disney Junior that my little princess adores. It’s called Sofia the First. Now Sofia the First has released its first collection of episodes on DVD that your little one can enjoy whenever the mood strikes: Sofia the First Ready to Be a Princess. This show is great for kids 3 to 6, and there’s a lot that I love about it.

First, I really enjoy the fact that Sofia the First in is fact the first princess who is a little girl. Sofia the First became a princess overnight when her mother married a king, the ruler of Enchancia. It turns out there’s a pretty big learning curve that goes along with becoming royalty.

Sofia the First is very relatable because her adventures feature situations and themes that young children themselves are beginning to experience and work out for themselves. In one episode “The Shy Princess,” the title character isn’t accepted by some of the princesses in Sofia’s friend group because she doesn’t behave like a princess is “supposed to.”

Sofia helps the group of friends realize that every person should be accepted and loved for who they are, and not pretend to be someone they aren’t to gain acceptance. It’s a pretty deep message for little ones, but one that is delivered with so much heart, not to mention pretty songs sung by the characters, that they won’t even realize they are learning something.

In another episode “Blue Ribbon Bunny,” Sofia enters a pet competition with a pet she thinks will win. Yet her best friend Clover the bunny is hurt because she didn’t pick him to compete. Sofia has to learn that friendship is more important than winning.

Ariel Winter from “Modern Family” is Sofia. I have followed her work since that sitcom began and never realized she had such a marvelous singing voice. Comedian Wayne Brady brings comic relief as Clover, and Tim Gunn, best known for his work on “Project Runway,” is the proper servant Baileywick.

So why not set up a special tea party and screening and enjoy a few episodes with your little ones for a royal treat?  Sofia the First Ready to Be a Princess is now on DVD!