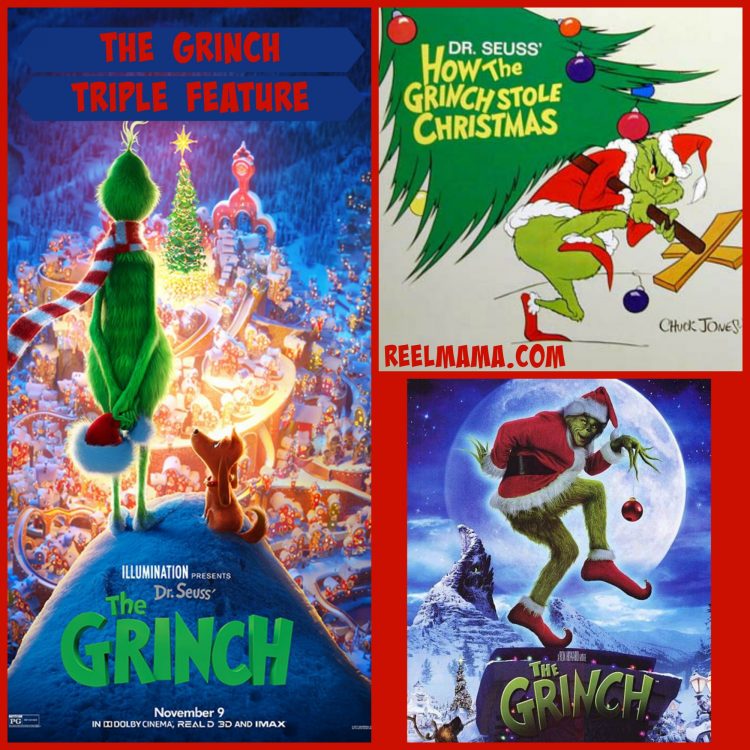 Maybe seeing Christmas trees in stores in August makes you feel a little cranky, a little frustrated, a little…Grinchy. I think we can all relate. In my house, it never quite feels like the holiday season is underway until we’ve seen or read Dr. Seuss’ How The Grinch Stole Christmas. Enjoying the hairy green Scrooge that everybody loves to hate helps us blow off a little holiday steam and stress. Because admit it, it’s kind of fun to watch a fellow so good at being bad.

Now, a brand new CG animated version of The Grinch is in theaters. It’s the perfect chance for us to revisit two movie classics starring the Grinch for a family movie night in while also sharing a mini review of the brand new version.

A classic Christmas movie if ever there were one. The animated original holiday special is only 26 minutes, perfect for very young kids. The Grinch is mean without being too scary, and he’s more likely to make kids laugh than frighten them. Boris Karloff (of original Frankenstein movie fame) brilliantly and wickedly narrates Dr. Suess’s ingenious poem. He also sings “You’re a Mean One, Mr. Grinch” to perfection. Chuck Jones’ animation so expressively captures Dr. Seuss’s vision. The screenplay is by Dr. Seuss himself. It just doesn’t get any better!

This live-action version of the beloved classic stars Jim Carrey as the Grinch. Carrey in this role is at the height of his comic genius. Clever, sly, and tongue-in-cheek, Carrey’s Grinch captures the very essence of the role. The world director Ron Howard creates in bringing Dr. Suess’ vision to life is a masterpiece of costumes, makeup, and sets. If you haven’t seen this version, it’s not to be missed. It’s loaded with tame but hilarious jokes that will appeal to parents, and kids will laugh out loud at Carrey’s brilliant slapstick. 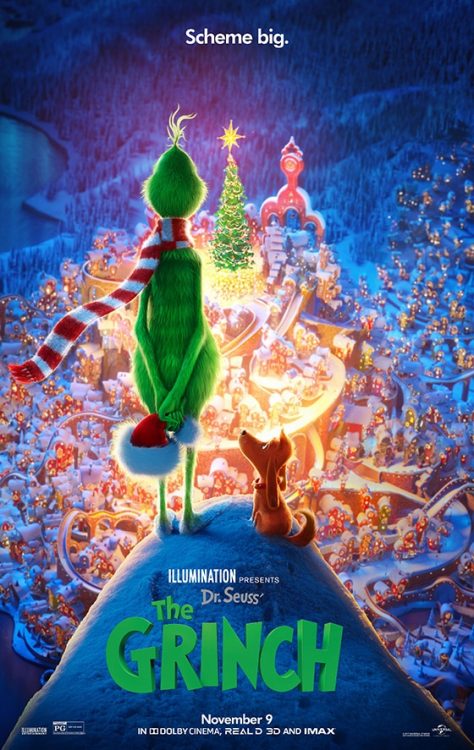 Hollywood decided it was high time for a reboot of the Grinch for a new generation. So how does this shiny new CG animated version stack up to the classics? Die-hard fans of the previous two might come away disappointed. Simply put: the Grinch simply isn’t quite mean enough throughout the film for his true transformation, when his heart increases by three sizes, to be effective. The Grinch is a sad and lonely figure, revealing a soft side numerous times along the way, especially toward his dog Max. The Grinch’s transformation into a repentant good guy is thus much less satisfying. Dr. Seuss’s original poem and the song “You’re a Mean One, Mr. Grinch” are missing, which is bound to disappoint folks who grew up with the classic.

However, this movie works perfectly for parents of young children looking for an entertaining holiday family movie. In fact, I can’t understand why the movie wasn’t rated G. Just fine for 5 and up.