Filmmakers can’t resist adapting a beloved children’s classic for the big screen, but remarkably it took decades for a film version of JRR Tolkien’s epic 1937 fantasy “The Hobbit” to be made.  Even then, it was designed for the small screen as an animated holiday television special (click here for my review of this charming, kid-friendly version of “The Hobbit” from 1977).  No doubt the sweeping landscapes and unusual cast of characters, not to mention the need to create a convincing fire-breathing dragon, proved daunting for filmmakers.

Yet technology has evolved to the point where it can do Tolkien’s great works justice, and we finally have a cinematic visionary who can pull it off: Peter Jackson, director of the new “Hobbit” film and “The Lord of the Rings” trilogy.   For those who haven’t seen the film yet, the burning question is: did Jackson pull it off?  For those who have seen the film, there is lots to talk about.  This is one of the most highly anticipated films in years.  Without giving too much away, I’d like to hit some of the high points as well as some of the points where I feel the film doesn’t quite deliver.

“The Hobbit” is a prequel of sorts to “The Lord of the Rings,” and chronicles the adventures of reluctant homebody Bilbo Baggins (Martin Freeman), a hobbit.  Tolkien created hobbits from his own imagination, like so many of his characters.  Bilbo leads a comfortable existence in his village, the Shire. Then the wizard Gandalf the Grey shows up uninvited to his home, and invites Bilbo to join him on an adventure fraught with peril, helping a motley crew of 13 dwarves reclaim their ancestral home of Erebor that has been taken from them by the dragon Smaug.  Hobbits have valuable skills, including being nimble and unobtrusive, which serve Frodo well on his own adventures.

In fact, Frodo (Elijah Wood) is Bilbo’s adopted son and makes a brief appearance in the film’s introduction.  One of the highlights of the movie is revisiting many of the most recognizable and beloved characters from “The Lord of the Rings” trilogy, played by the same actors, including Hugo Weaving as the elf king Elrond, Christopher Lee as Saruman, Cate Blanchett as Galadriel, Andy Serkis as Gollum, and of course, Ian McKellan as Gandalf.

Jackson has taken some liberties with “The Hobbit” in order to make this possible, mining source material from “The Lord of the Rings” appendices, additional story information by Tolkien that was not included in that trilogy of films.  Jackson uses it to connect the dots between “The Hobbit” and the “LOTR” trilogy.  For instance, Jackson deduces that it would be logical for Galadriel to be present during a meeting of the White Council of leaders who discuss the fate of their kingdoms when the bad guys start rearing their ugly (and I mean UGLY) heads.  Such moments are a refreshing take on a familiar story, and the performances by these veteran actors are wonderful.

The only downside is that it adds to the somewhat unwieldy length of the almost three-hour film.  While I was never bored for a moment in this film, there definitely were moments that were unnecessarily drawn out, such as the introduction of each dwarf.  This alone probably ate up half an hour as each one knocked on Bilbo’s door, Bilbo opened it, Gandalf introduced him, the dwarf entered to join the party, Bilbo reacted with dismay as he closed the door only to receive another knock, and so on.  It’s not entirely surprising that some scenes could use a trim (much like the dwarves’ beards), considering that the book “The Hobbit” is a not much longer than a novella, and the new “Hobbit” trilogy is going to be three three-hour films.

As for the new 3D technology with 48 frames per second as opposed to 24, there are advantages and disadvantages.  The technology works best in the quieter moments, when we have a chance to take in a panorama of the Shire, or the magnificence of the elven kingdom Rivendell.  At these times Dan Hennah’s outstanding production design really shines through, and we feel as if we are in the same space with the characters.  The technology lends a very different look to the movie than traditional film (or digital technology that mimics film), which audiences are used to.  During the numerous battle scenes, the new technology lends it an unfortunate video game quality.  When characters move quickly or the camera swerves, the effect can seem jerky and a little disorienting.

I’m convinced that this pioneering technology will be the future of movies with further development, but there’s more work that needs to be done to perfect it.  No doubt “The Hobbit” will be revered in future years as a seminal and important work.  It was a risk to use this new technology for a big Hollywood blockbuster.  In parts it paid off, while in others it didn’t.

In closing, since I don’t want this review to seem as long as the movie, I highly recommend seeing “The Hobbit” on the big screen.  It’s an experience that simply cannot be recreated at home, in the comfort of your own hobbit hole.

Reel Mama’s recommendation: For parents, I’m going to recommend this movie for ages 12 and up.  There are many intense battle scenes that include beheading, dismemberment, and some gore.  (Granted, some parents with kids used to playing video games might not mind this.)  I was hoping that it would be appropriate for a slightly younger audience, but for under 12 the animated version will have to do. 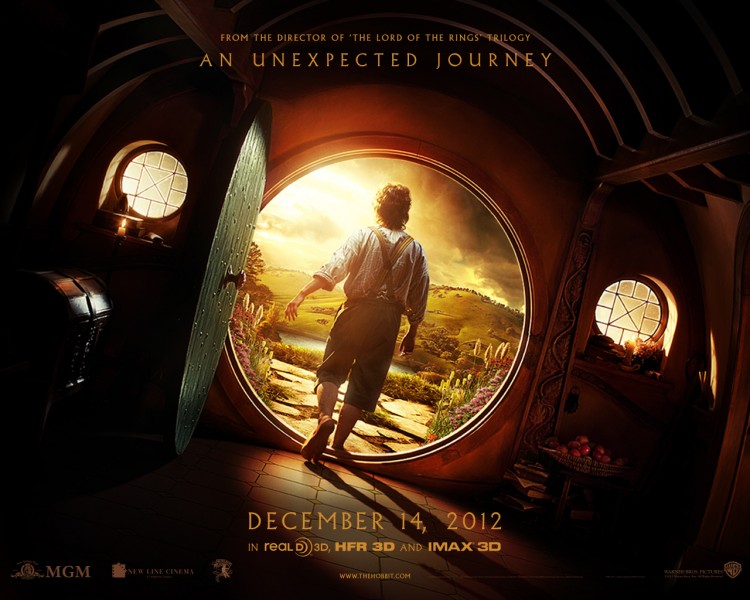 Did you enjoy this review?  Leave a comment!  Don’t forget to follow me using the social media icons at the top right for the latest on movies and many family friendly creative activities.  I’d love for you to check out my other movie reviews in the movies section.