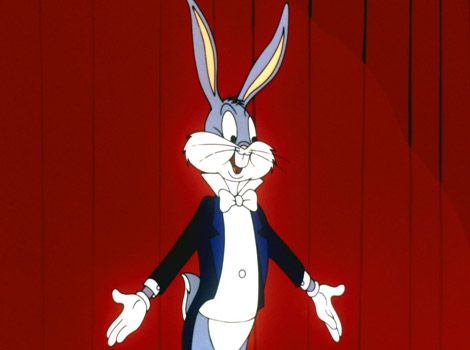 Happy birthday to our favorite “wascally wabbit”!  I recently had the great pleasure of attending Bugs Bunny’s 75th birthday bash at the Turner Classic Movie Film Festival.  The celebration included a screening of ten outstanding and beautifully restored Bugs Bunny cartoons on the big screen. The cartoons played to a packed house at the Chinese Theater in Hollywood, quite appropriately on a Saturday morning (and who didn’t love Saturday morning cartoons?).

Film critic Leonard Maltin and animation historian Jerry Beck curated the program, in which they wanted to show Bugs Bunny’s evolution through the years.  Bugs got his showbiz start as a prototype in a zany 1938 cartoon in which Porky Pig hunted him, called “Porky’s Hare Hunt.” 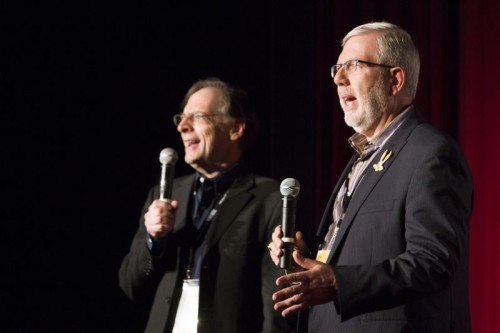 In honor of Bugs’ birthday–this is the diamond edition, folks!–I decided to put together a list of the crowd-pleasing best Bugs Bunny gags of all time.

In “Long Haired Hare” (1949), directed by Chuck Jones, Bugs Bunny does everything in his arsenal to deflate the ego of a preening opera star.  He dresses up as a fawning teenybopper (more on this later) and asks for the opera star’s autograph, at which point he places a lit dynamite stick in the egomaniac’s hand instead of a pen.  The opera singer only realizes what he’s holding at the moment it explodes.  Doh!

This is very classic Bugs. “Bugs Bunny Rides Again” (1948), directed by Friz Freleng, pits Bugs against Yosemite Sam. Bugs Bunny looks straight at the viewer just before he is about to pull another prank on poor Sam, and says, “Sometimes me conscience bothers me.  Not this time!” Elmer Fudd was also not spared from Bugs Bunny’s mischievous machinations.  In “Wabbit Twouble” (1941), directed by Robert Clampett, Bugs subjects Elmer to hilarious humiliation, looks straight at us, and says, “I do this stuff to him all through the picture.”  It’s so much fun to be in on Bugs’ wicked little tricks!

In “Rabbit Seasoning” (1952), directed by Chuck Jones, Bugs pulls a fast one on Daffy.  Elmer Fudd wants to hunt rabbits, and Bugs’ demise can’t come soon enough for Daffy.  Bugs isn’t going down without a fight though, and ultimately Daffy’s insistence that Elmer shoot Bugs ends up backfiring in this exchange:

Bugs: “It’s true doc, I’m a rabbit, would you like to shoot me now or wait till you get home?”

Bugs: “You keep out of this! He doesn’t have to shoot you now.”

Of course Daffy gets shot, and then demands a run through of the exchange with Bugs resulting in him having his bill blown off a second time.

Looney Tunes’s trademark is the hilarious results of an unexpected gun blast or dynamite explosion on an unsuspecting victim without exacting any real bodily harm.  In “Rabbit Seasoning,” Daffy’s duck bill ends up on top of his head after Elmer shoots him now rather than waiting till he gets home.  In disgust, Daffy then has to reattach the bill to his face.

5. Bugs be a lady tonight 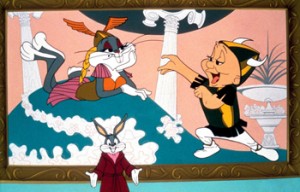 An all-time favorite of the Bugs Bunny gags. Bugs just LOVES to dress in drag if it will exact revenge on his rival.  He is being hunted in most of these cartoons after all, and fair is fair.  Yet as Jerry Beck reminded us at the screening, we have to remember that these movies were never intended just for kids, but for grownups as well.  They were screened before all kinds of feature films in movie theaters.  So if Bugs’ foray into cross dressing seems like adult humor, well, it is!  In What’s Opera, Doc? (1957), directed by Chuck Jones, Bugs dresses as Brunhilda, the viking maiden, complete with a long train of blond hair and a horned viking helmet.  Elmer fails to recognize that Brunhilda is not human but bunny.  In fact he is the very rabbit Elmer is singing about in “Kill the Wabbit!”  Elmer is of course humiliated when he discovers that the object of his adoration is actually Bugs.

6. Living on the edge

Lucky for us viewers, most Bugs Bunny cartoons take place where there are lots of cliffs for Bugs’ hapless victims to fall off.  Do they deserve it?  Bugs would plead self-defense.  In “Bugs Rides Again,” Yosemite Sam insists that “this town ain’t big enough for the both of us!” (him or Bugs).  Bugs taunts Yosemite by saying, “I dare you to step over this line.”  Bugs draws a line on the ground and Yosemite, feeling feisty, does.  Bugs draws another, Yosemite steps over it again, all the way until the final line. Bugs draws it, and Yosemite crosses it…right off a cliff.

In “Wabbit Twouble” Bugs gives Elmer a great big smooch right on the kisser, just to infuriate him.  The kiss is the straw that breaks the camel’s back and the precursor to countless big chase scenes between Bugs and Elmer.

Bugs and his frenemies love to psych each other out.  In Slick Hare (1947), directed by Friz Freleng, Elmer needs to get a rabbit dinner for Humphrey Bogart.  Conveniently Bugs is at the restaurant too, eating carrots: “What’s cookin’?” Bugs asks.  “Fwied wabbit,” answers Elmer.  “Let’s have a look, shall we?” says Bugs.  Bugs peers into a pot with a mirror Elmer has placed at the bottom, only to see his own reflection.  Such sight (or psych) gags are Looney Tunes trademarks. Luckily Bugs is ready to outsmart Elmer when he dons a Groucho Marks suit.  Bugs plays a similar “psych” gag on Elmer in “Wabbit Twouble,” when he paints Elmer’s glasses dark while he’s napping.  Elmer wakes up, thinking it’s night, and from there Bugs really messes with his head.

Some of the best Bugs Bunny gags are the traps that his rivals set for him, which he of course outsmarts. In “A Wild Hare” Elmer sets up a trap with a sign labeled “CARROTS,” pointing to a crate ready to drop on the unsuspecting Bugs when he reaches inside.  The trap falls down, and Bugs has a chance to perform a switcheroo on Elmer, leaving a skunk in the crate before making a crafty exit.

In “A Wild Hare” (1940), directed by Tex Avery, Bugs exacts his sweetest revenge on Elmer Fudd, who is constantly on the hunt for “that scwewy wabbit,” when he pretends that Elmer has actually succeeded in killing him. Sputtering and clutching his chest, Bugs collapses stiffly on the ground, much to Elmer’s horror.  Bugs reprised this gag in numerous cartoons, most notably in the opera spoof “What’s Opera, Doc?”  Grieving, Elmer picked up Bugs’ limp body and carries it into the sunset, at which point Bugs looks into the camera and says, “What did you expect in an opera…a happy ending?”