Parents, you deserve a break today.  In fact, you deserve a date!  So I’m suggesting three films that are great for couples to cozy up to one the kiddies are in bed.

All three of these films are directed by Lasse Hallstrom, a Swedish master whose early work inspired me to get into filmmaking and writing about film.  Hallstrom gracefully transitioned into directing films in English.  Here are three sweet, thoughtful, and romantic films directed by Hallstrom that are perfect a spontaneous date night at home: 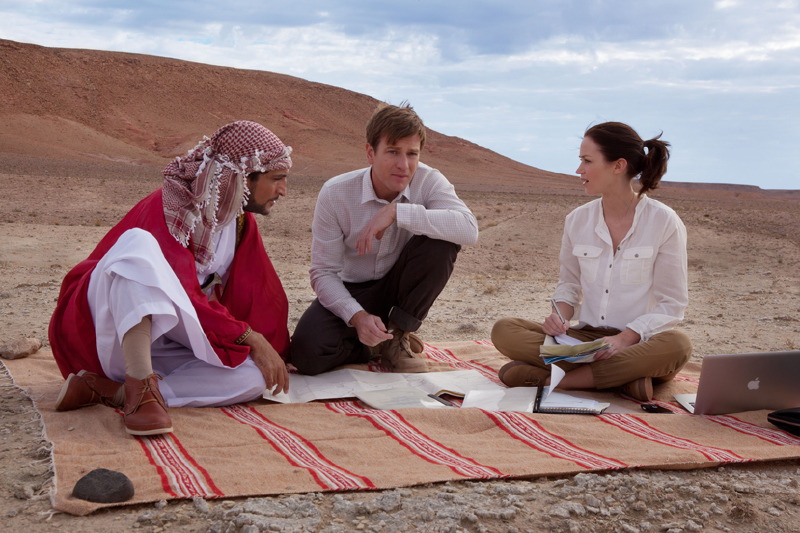 This film pleasantly surprised me.  I was skeptical that I would really enjoy a film with “salmon fishing” in the title, and so was prepared to be a little bored watching some of my favorite actors casting a fly line for an hour and a half.

It turns out that “Salmon Fishing in the Yemen” has an entertaining story, and a very heartwarming one at that.

A fabulously wealthy sheik (played by the disarmingly charming Amr Wacked) from the Yemen happens to be not only an anglophile, but also an angler.   Out of his love for all things originating in the British Isles, he’s purchased an enormous estate in Scotland where he has taken of the sport of fly fishing for salmon.  Since money is no object for him, he has a dream of bringing this meditative sport to his home country, and he instructs his representative Harriet Chetwode-Talbot — isn’t that a terrifically proper British name? — (played by Emily Blunt) to make it happen, in spite of the dessert climate there.

His representative in turn contacts a top ecology and fisheries expert Dr. Alfred Jones (Ewan McGregor) to make the dream a reality. Skeptical, Alfred is eventually convinced by the prime minister’s press secretary (Kristin Scott Thomas) that it is worth the undertaking because the British government is desperate for a feel-good story about the Middle East.  Alfred’s efforts to accomplish the outlandish mission brings him closer to Harriet, and a sweet and unlikely romance blossoms between the two, though complications with the project and their personal lives could keep them apart.

I really enjoyed the film’s mix of romance and politics.  It has a very British sensibility, and the movie draws you into the world of Londoners, both the every day citizen and the super rich, in a way that is immediate and fresh.

This charming confection has a delicious story featuring a romance between gorgeous French star Juliette Binoche and Johnny Depp as a traveling gypsy.  Binoche portrays Vianne, a free spirit who opens a chocolate shop in a conservative French country village during an important religious holiday.  The chocolates she serves mysteriously cures what ails the townspeople in their personal lives, and particularly seems to help them out in the love department.  But Vianne’s recipes for curing the towns peoples’ love lives outrageous the town officials, who will do everything he can to shut her down.  Johnny Depp is the vagabond who mysteriously drifts into Vianne’s life and sweeps her off her feet, proving that the bonbon baker herself needs to be loved.

Heath Ledger stars in the titular rolls as the notorious ladykiller determined to win the heart of a beautiful young scholar with feminist ideals (Sienna Miller) in eighteenth century Venice.  This film is pure eye candy, and watching Francesca resist Casanova’s advances against the stunning backdrop of Venice will delight lovers of period and costume dramas who want something more lighthearted and fun.

The film may not have the resonance and brilliant plot of “Shakespeare in Love” but it is thoroughly enjoyable.  This film will transport you to magical Venice, an ideal setting for a temporary “getaway” with a movie date night.