Parents who grew up with Trolls, invented by Thomas Dam, will recall the little dolls with the stand-up hair and rigid plastic bodies. That a new animated movie inspired by these little beings could be fun and cute — after many failed previous attempts to bring the popular toys to the small screen — is pretty remarkable.

And that’s just what the new Trolls movie is: sparkly fun with new renditions of disco greats like “I’m Coming Out,” and even older classics like “Sound of Silence.” Justin Timberlake, who was in charge of the music selections, has wonderful taste, and his own hit “Can’t Stop the Feeling” is the heart and soul of the movie’s soundtrack and magic. He is also the voice of Branch, a pessimistic party pooper with hidden talent.

Toymaker’s original mistake with its failed Trolls TV shows was perhaps was in trying to capture boys’ imaginations with fighting versions of these dolls, who seem inherently too adorable yet wise to be believable as warriors. DreamWorks Animation took a savvy approach by targeting this movie to little girls. Their heroine is an optimistic princess troll named Poppy who loves glitter and scrapbooking, and most of all, singing. 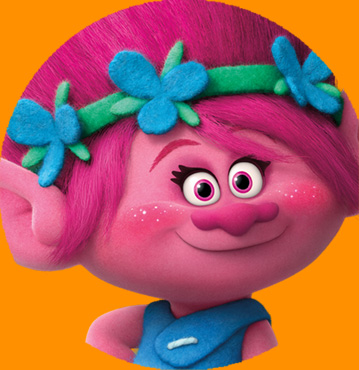 Poppy’s metal (or plastic?) is tested when her friends are kidnapped by the evil Bergen, who love to eat trolls. Rumor in the Bergen world has it that eating a troll is the secret to happiness. She has to find her girl power groove to pull off a difficult rescue effort.

Sure, the movie feels a little too commercial, and the plot is extremely simple. Yes, this is a blatant attempt to launch a new marketing franchise. But in a world of “sexy” toys marketed to girls, a cute and positive imaginative character really isn’t a bad thing.

It isn’t often that a movie in the theaters works for kids as young as five. It’s safe to say that the Trolls movie is one of them. Take the kids, and don’t be afraid to dance in your seat like we did.