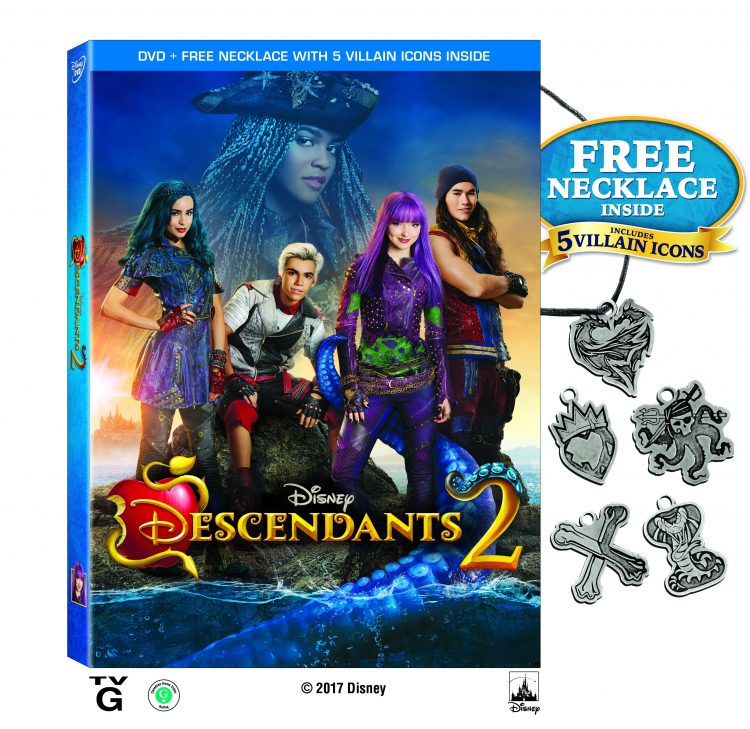 Enter to win Descendants 2 using the Rafflecopter below. We’ll have 5 winners!

I have to admit I was skeptical of Disney Channel’s Descendants franchise. The idea of a movie following the teenage children of Disney villains felt like a marketing grab. Yet, if you have a little girl at home age six or older with a former (or present) Disney princess obsession, then she is probably going to love Descendants and Descendants 2.

Never mind that the premise is preposterous. When did the villains have these children? Maleficent isn’t exactly maternal. The details are murky, especially how Ursula, the sea witch who is half octopus in The Little Mermaid, has a human daughter named Uma (China Anne McClain). Details best left unsaid.

In Descendants 2 the villains remain banished to a seedy island called the Isle of the Lost. In Descendants, several of the villains’ children were given the rare opportunity to redeem themselves by attending a boarding school in the kingdom of Auredon with the likes of Beauty and the Beast’s son, Sleeping Beauty’s daughter, and the Fairy Godmother’s daughter.

In the sequel, Mal (Dov Cameron), the central character (daughter of Maleficent), returns to the Isle of the Lost because she misses the excitement of being “wicked.” There she and Uma must battle it out to see who will be queen of the isle.

Enter to win on of five Descendants 2 DVDs for your next family movie night!