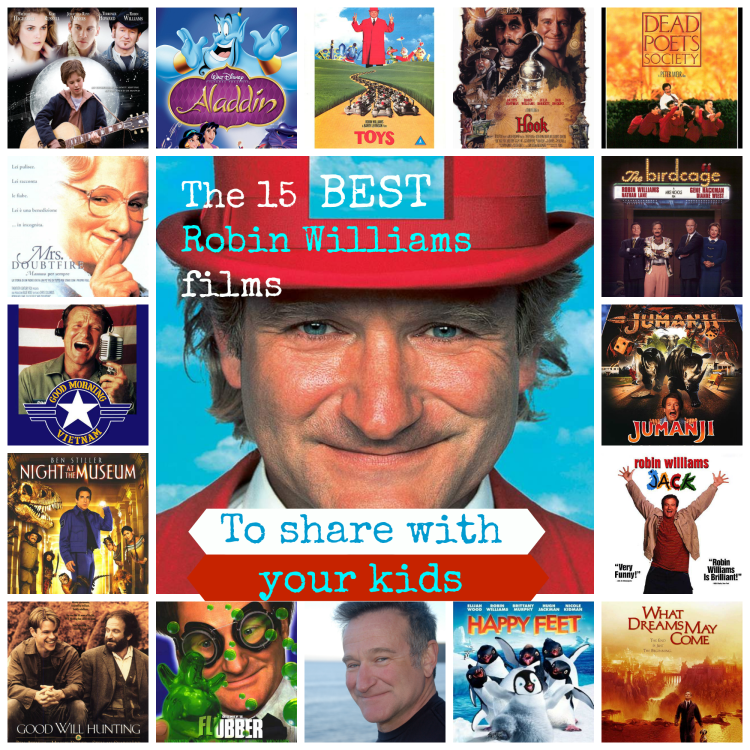 Plan a family movie night this weekend in celebration of Robin Williams’ brilliant comedic gifts.  Introduce your kids to the wonders of his genius. Here are my top 15 recommendations of Robin Williams movies to watch with your family, to enjoy and remember.

This is a must-see movie containing Williams’ finest performance for which he won an Academy Award. In it he portrays a psychiatrist counseling a cocky math whiz Will, played by Matt Damon. When Williams character bears his soul, it changes Will’s life for the better. Don’t miss this one. (Age 14 and up, for strong language and themes) 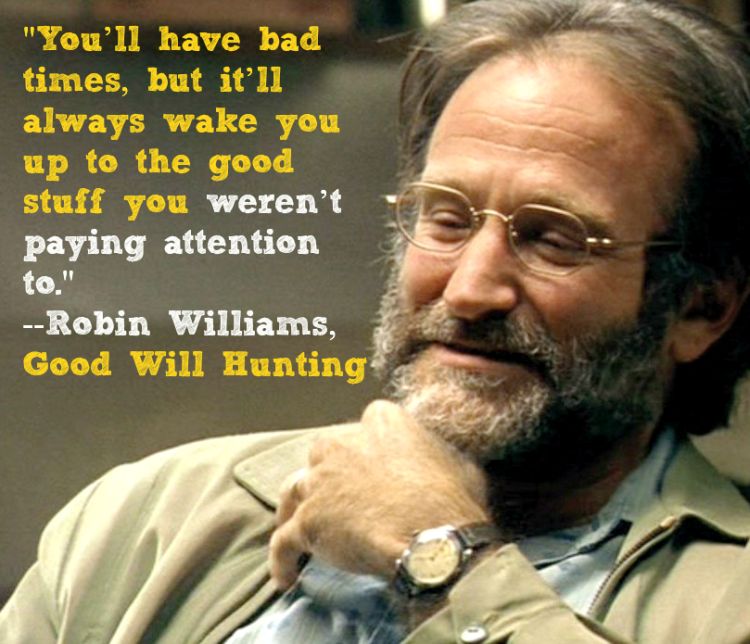 One of Williams’ most beloved performances, in it he plays a dad going through a divorce, who poses as a warm-hearted British nanny so that he can spend more time with his kids. Hilarity ensues and yet the movie contains a deep message about families experiencing divorce. (For age 8 and up)

This remarkable movie didn’t get much attention during its release, but it certainly deserved it. Inspired by the story of Oliver Twist, Williams plays the Wizard, a Fagin-type schemer who takes in street boys who are also talented musicians. The movie shows the transformative power of music in one very special boy’s life. (Age 9 and up)

In another of Williams’ defining roles, he portrays an eccentric teacher Mr. Keating, who urges a rebellious group of boys at an exclusive prep school to “seize the day” by expressing themselves. Mr. Keating leads the boys to discover the words of the great poets, inspiring the boys to create a secret group called the Dead Poet’s Society. (For age 14 and up.)

In this adorable comedy for all ages, Williams voices a wise penguin who convinces his protegé, a very young penguin with a remarkable ability to dance, that his talent is cool. Williams is only a supporting character in this movie, but it’s a wonderful family friendly choice if you have very young kids.

The quirky film has remarkable, imaginative visuals. In it, Williams portrays Leslie, who never really grew up. His father passes away and leaves the family business, a toy factory, to his brother, a military man.  The movie takes on a disturbing quality when the toy factory becomes a battleground. Oddly, the movie contains strong language and sexual innuendo, making it inappropriate for young children, yet fans of Williams won’t want to miss his quirky, childlike performance. (For age 13 and up)

Another take on the theme of movies like Big, Williams plays Jack, a boy stuck in a body that is rapidly aging. At 10, Jack looks 40. His parents let him go to school, where, in spite of some initial bullying, he makes new friends. The movie contains a beautiful lesson about the fleeting nature of life. (For age 12 and up for sexual situations and language)

Is there a theme in Williams’ work? Yes, it is the man who never wanted to grow up. In this movie, Williams plays Peter Pan, but not as we usually know him. Rather, this Steven Spielberg movie operates on the concept that the boy who used to be Peter Pan DID grow up, and forgot all about who he used to be. The movie may be sentimental, but this is a perfect role for Williams, and Dustin Hoffman as Captain Hook is not to be missed. (For age 9 and up)

Williams plays Armand, a gay nightclub owner whose son announces that he wants to marry the daughter of a right-wing politician. This was a different kind of comedic role for Williams, in which he had to play the straight man to Nathan Lane’s more ourtrageous Albert. Yet Williams’ quiet moments are moving, and he still has quite a few opportunities to steal scenes with typical Robin Williams flair. A remake of La Cage Aux Folles. (Age 14 and up)

In it Williams plays Alan, who as a boy gets caught inside a magic, mysterious board game called Jumanji that brings to life rampaging wildlife when played. Decades later, two children discover the game and start playing it, releasing Alan and the stampeding animals along with him. The kids must finish the game to restore order in the universe. The movie has remarkable effects by the same artists who did Jurassic Park, yet the movie doesn’t have a lot of heart. Common Sense Media explains that this movie is dark and intense. (For age 9 and up.)

If you want the pure, unfiltered genius of Robin Williams’s creativity, watch his performance as the Genie in Aladdin. This really is Robin Williams at his finest with his comedic improv. He takes the movie from what might have been just another Disney fairy tale to absolutely extraordinary heights. Climb on a magic carpet ride with Robin Williams. You won’t be sorry! (For age 5 and up)

Want some pure silliness? Try Flubber, in which Williams plays a scatter-brained professor who comes upon a remarkable invention called Flubber that has all kinds of possibilities. (For 7 and up)

Night at the Museum

Williams has a supporting role in this movie, yet it’s a wonderful and imaginative adventure film in which the exhibits come to life in a museum. Williams plays a wax figure of Teddy Roosevelt come to life, who mentors a museum’s night guard (Ben Stiller) on how to control the out-of-control exhibits that become real at night. Short on story but long on excitement, kids will be thrilled by this adventure. (8 and up)

What Dreams May Come

Common Sense Media says this movie is a “lush drama” that is “worthwhile for thoughtful teens.” Williams plays a doctor who explores heaven and hell after his accidental death, seeking to reunite with his wife who committed suicide.

This is another seminal role for Williams, one that launched his career while familiarizing  audiences with his frantic, brilliant comedic style and showing off his capabilities as a dramatic actor as well. He received an Oscar nomination for playing a DJ sent by the Air Force to Vietnam to entertain the troops. Adult themes and violence make this film appropriate only for teens. A classic film not to be missed.

Yesterday, as I was cleaning out my garage, I happened to discover an old DVD. It was a movie starring Robin Williams that I watch with my family every Christmas called Toys.  I wondered how it had gotten there, and as I placed it with the rest of my DVD collection, I thought how much I was looking forward to watching Robin Williams’ antics again. I couldn’t wait to see my daughter’s reaction to his sweet, innocent performance in this movie. Little did I know that I would be mourning the loss of his life along with the rest of the nation today.

Toys opens with a beautiful song called “Closing of the Year”:

If I cannot bring you comfort
Then at least I bring you hope
For nothing is more precious
Than the time we have and so
We all must learn from small misfortune
Count our blessings that are real
Let the bells ring out for Christmas
At the closing of the year.

It is truly heartbreaking that Robin Williams was unable to count his blessings that were real in life. Yet I am sure that somewhere, angels are laughing uncontrollably because Robin Williams’ impersonation of God is so pitch perfect.