Sequels are Hollywood’s bread and butter, and this especially seems to be the case with kids’ movies. This week The Lego Movie 2: The Second Part is hitting theaters, but is it going to give audiences exactly what they want, only more of it?

Let’s take apart what worked in the last movie (Lego pun intended). First, everybody is in on the joke. Parents loved the “cheap” production look of the Lego movie that probably reminded them of movies they made when they were kids, and children didn’t seem to mind it. The production value of the animation is artfully made to look so low that it’s bad, and that’s hilarious.

The filmmakers have made an art form of self-awareness, and they not only admit but seem to celebrate the fact that this is a shameless marketing tool. Its flagrant attempts to capitalize on nostalgia are so in your face that you have to laugh out loud.

Second, The Lego Movie is just fun, and who doesn’t need that? A movie that has the kids thoroughly entertained while keep the parents chuckling and nodding in recognition is pure gold.

So, is The Lego Movie 2: The Second Part a perfect fit with the original? It starts where The Lego Movie left off. If a sequel is designed to give audiences even more of what it loved about the first, then parents and kids are going to come away feeling complete.

The Lego Movie 2 has even more self-awareness that is even funnier than the first one. Examples abound with the soundtrack, like “Catchy Song”: “This song’s gonna get stuck inside your head.” Because things are so bleak in Bricksburg, we hear the flip side of the “Everything is Awesome” anthem—“Everything’s Not Awesome.”

There is lots of wordplay that kids will totally get: for instance, Tiffany Haddish is Queen Watevra Wa’nabe (get it? “Whatever Wannabe?). And Emmet, Lucy, Batman and their friends are forced to travel to the dark galaxy known as “The Systar System” (i.e., little sister’s room).

The Lego Movie 2 is just consistently as funny as the first one. If I were to pick it apart, I’d say that my only gripes are the following: the extra frenetic pace, the plot that gets a little wonky and falls apart a bit at the end, and the live-action sequences that go on a little too long. That being said, you DON’T want to miss live-action mom Maya Rudolph stepping on a Lego…twice!

Pin this for later, and let me know what you think of this movie in the comments section below! I’d love for you to connect with me on Facebook and Twitter too so you can tell me which movies you’d like me to cover next. 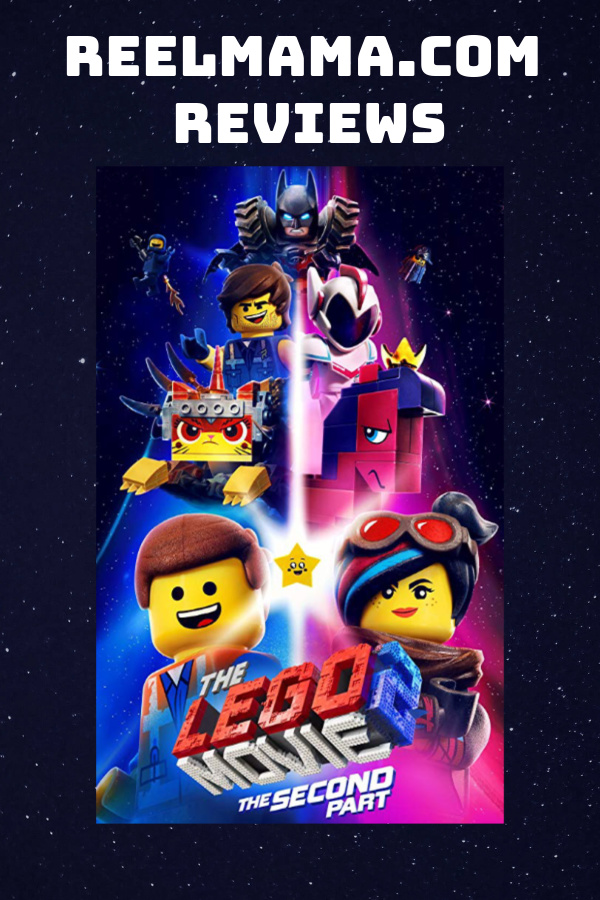