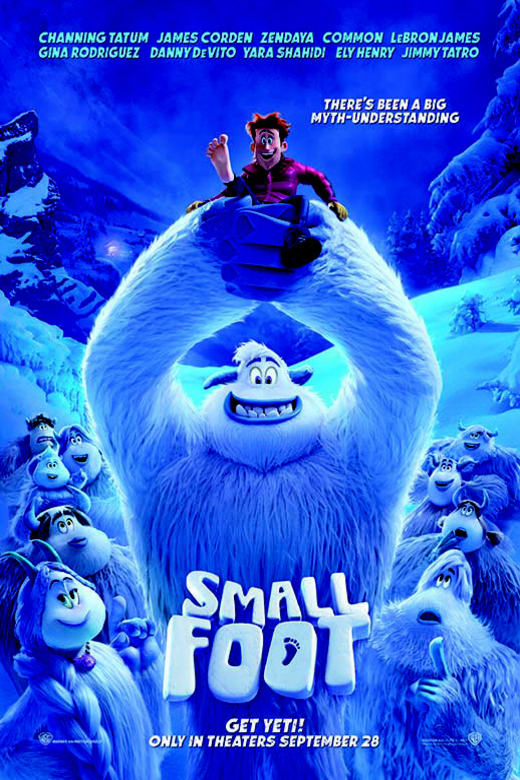 Everybody’s heard of the legend of Big Foot, a large, hairy, and very elusive creature who hides in the woods but leaves footprints the size of large pizzas. Do they exist? If they do, should we fear them, or befriend them? Smallfoot asks the clever question: what if the shoe were on the other foot?

That is, what if the creatures with the big feet were the ones questioning humans’ existence? What if they were the ones perpetually seeking proof that the “Smallfoot” is real?

RELATED: Check out the Halloween movies and shows now streaming on Netflix!

Smallfoot is set in the world not of Big Foot, but of the Yeti, otherwise known as the “Abominable Snowman,” essentially a Himalayan Big Foot. We meet Migo (the voice of Channing Tatum), a friendly, furry Yeti who is happy with his life and the prospect of his future. His destiny: wearing a stone helmet, to be the one jettisoned across a canyon and into a gong that will ring in “the Golden Snail” (the sun) every morning. His community believes the sun won’t come up unless the gong goes off. It’s one of many beliefs that are stuck in the Stone Age, and that’s the way their leader, the Stonekeeper (the voice of Common), likes it. One of the most important rules set in stone: the Smallfoot doesn’t exist!

But then something crashes into Migo’s world that makes him question everything: an airplane. And the pilot is, of course, a Smallfoot. Migo’s new truth soon conflicts with the Stonekeeper’s “wisdom,” throwing the village into turmoil. However, Migo doesn’t let that stop him from exploring the land “Beneath the Clouds.” He meets human wildlife reality show host Percy (the voice of James Corden). Even though they don’t speak each other’s language, they become friends, and Migo’s village will have to decide how to deal with their traditions being turned upside down.

Smallfoot’s cute concept allows exploration of themes such as accepting those who are different from ourselves and being open to new ideas that might challenge our traditional beliefs. Its message is that asking questions in valuable, and that while the unknown may seem scary, dealing with new challenges with the support of family and friends can bring us to a better place of understanding. This movie is just fine for kids six and up. There are a few scary scenes including one describing conflicts between the humans and the Yetis. Overall, Smallfoot is full of clever humor and sight gags and upbeat songs.